Robotic Vagabonds Aim for the Moon 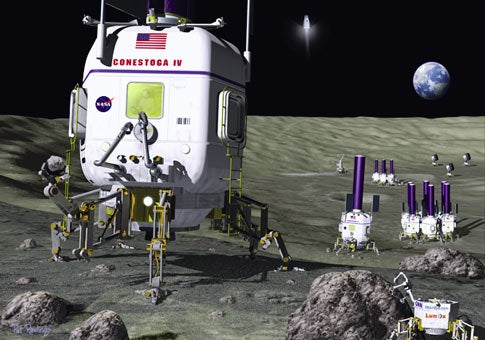 Most depictions of potential moon bases include habitats and rovers, but NASA’s “Habot,” a mobile base and science lab, combines the two. A lunar-exploration concept vehicle conceived in 2001, Habot has received renewed attention since President Bush issued his mandate that NASA return to the moon by 2015. As many as six Habots would travel together, drawing energy from the sun or receiving beamed microwave or laser power from an orbiting satellite. Marc Cohen, the NASA aerospace engineer charged with studying the feasibility of the concept, says that the Habots would most likely have wheels, although these might be attached to robotic legs to enable the vehicles to better negotiate difficult terrain. The Habot “represents a radical departure from the old way of thinking, that if you created a base you had to build roads, dig trenches, and lay down infrastructure,” Cohen says. With Habot, the base is broken into traveling modules–science labs, sleeping quarters, command centers–each of which moves independently at up to two kilometers an hour. Once they reach a scientifically promising area, the four-meter-wide Habots can be linked together to create a semipermanent homestead with life support and communications systems.