On June 21, Burt Rutan’s innovative manned rocket, SpaceShipOne, touched down in the Mojave Desert after a historic trip into suborbital space. Pilot Mike Melvill flew the rocket to 328,491 feet, just barely punching out of the atmosphere. After touchdown, as the craft was being towed before a crowd of 27,000 spectators, newly crowned astronaut Melvill sat astride his spaceship holding a sign that read “SpaceShipOne, GovernmentZero.”

If the flight does indeed mark the beginning of nongovernment-supported spaceflight, what comes next? Assuming Rutan can fix the control glitch that sent Melvill veering dangerously off course, few people doubt that the 62-year-old aviation visionary will take home the Ansari X Prize, a $10-million purse reserved for the first civilian team to launch a three-person craft into suborbital space twice within a two-week period. And though Rutan is playing coy, he and his financial backer, billionaire Paul Allen, have dropped intriguing hints of their post-prize plans.

Since joining forces, the duo has made it clear that their vision goes beyond winning a prize. “We hope to engender a commercial, suborbital business,”Allen said at the June press conference. One NASA study has found that 1.3 percent of Americans would pay $100,000 to ride into space and that many more would fly at $10,000 a ticket. Serving those clients would entail making space launches much cheaper than they are today (Dennis Tito paid $20 million for his trip into orbit)–and that, Rutan explains, is the goal of
SpaceShipOne.

A profitable commercial space plane, however, will need to haul more than just three passengers. During the June press conference, Rutan alluded to a second-generation vehicle that would tote more tourists. “It makes an enormous difference to fly 6 to 10 people,” he noted. SpaceShipOne incorporates a scalable design that could balloon in size without necessitating significant changes to its shape. Such a craft would not only be larger but would fly higher than SpaceShipOne, to give more “time to unstrap and float around,” Rutan says. Frank Macklin, an engineer at SpaceDev, a company that built components for SpaceShipOne‘s hybrid rocket, says it’s feasible to build a rocket motor large enough to power a suborbital bus.

But Rutan wants to offer customers more than just zero-G floating. “I don’t think orbital travel makes sense if you stay in the spacecraft–you have to go to a resort hotel in orbit,” he said in June. Reaching the speeds needed for orbit would require building a small, cheap and cramped transfer van rather than a roomy tour bus.

That task won’t be as easy as scaling up and strapping on a bigger motor. Paul Czysz, an aerospace engineer at St. Louis University, points out that going higher means going faster, and more speed equals more heat. Orbital space travel is a “big, big, step,” he cautions. “It takes 70 times as much energy to get up, and the current design would never make it in one piece.” In addition to pricey thermal protection, an orbital van would also need a fully automatic control system for stability in space, and a multistage rocket booster.

Nobody, least of all Rutan, is talking about how much time and money these craft would take to develop. “Sometimes he’s brilliant,” Czysz says. “But sometimes there are practical things that turn round to bite him.” 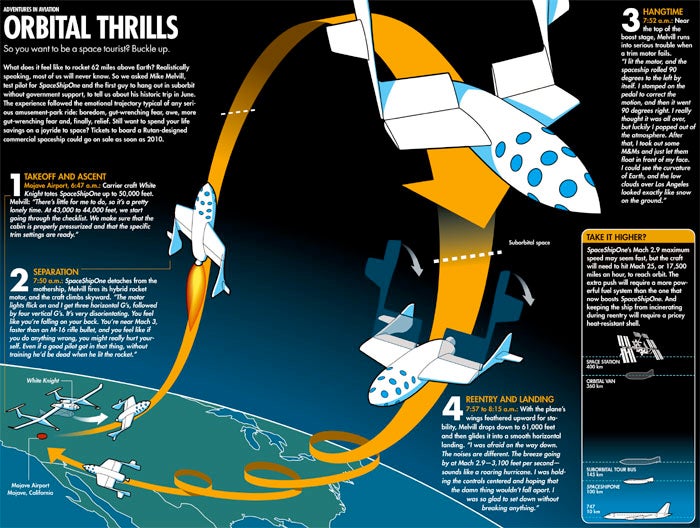 What does it feel like to rocket 62 miles above Earth? Realistically speaking, most of us will never know. So we asked Mike Melvill, test pilot for SpaceShipOne and the first guy to hang out in suborbit without government support, to tell us about his historic trip in June. The experience followed the emotional trajectory typical of any serious amusement-park ride: boredom, gut-wrenching fear, awe, more gut-wrenching fear and, finally, relief. Still want to spend your life savings on a joyride to space? Tickets to board a Rutan-designed commercial spaceship could go on sale as soon as 2010. 1. TAKEOFF AND ASCENT Mojave Airport, 6:47 a.m.: Carrier craft White Knight totes SpaceShipOne up to 50,000 feet. Melvill: “There’s little for me to do, so it’s a pretty lonely time. At 43,000 to 44,000 feet, we start going through the checklist. We make sure that the cabin is properly pressurized and that the specific trim settings are ready.”2. SEPARATION 7:50 a.m.: SpaceShipOne detaches from the mothership, Melvill fires its hybrid rocket motor, and the craft climbs skyward. “The motor lights flick on and I get three horizontal G’s, followed by four vertical G’s. It’s very disorientating. You feel like you’re falling on your back. You’re near Mach 3, faster than an M-16 rifle bullet, and you feel like if you do anything wrong, you might really hurt yourself. Even if a good pilot got in that thing, without training he’d be dead when he lit the rocket.” 3. HANGTIME 7:52 a.m.: Near the top of the boost stage, Melvill runs into serious trouble when a trim motor fails. “I lit the motor, and the spaceship rolled 90 degrees to the left by itself. I stomped on the pedal to correct the motion, and then it went 90 degrees right. I really thought it was all over, but luckily I popped out of the atmosphere. After that, I took out some M&Ms; and just let them float in front of my face. I could see the curvature of Earth, and the low clouds over Los Angeles looked exactly like snow on the ground.”4. REENTRY AND LANDING 7:57 to 8:15 a.m.: With the plane’s wings feathered upward for stability, Melvill drops down to 61,000 feet and then glides it into a smooth horizontal landing. “I was afraid on the way down. The noises are different. The breeze going by at Mach 2.9–3,100 feet per second–sounds like a roaring hurricane. I was holding the controls centered and hoping that the damn thing wouldn’t fall apart. I was so glad to set down without breaking anything.”TAKE IT HIGHER? SpaceShipOne‘s Mach 2.9 maximum speed may seem fast, but the craft will need to hit Mach 25, or 17,500 miles an hour, to reach orbit. The extra push will require a more powerful fuel system than the one that now boosts SpaceShipOne. And keeping the ship from incinerating during reentry will require a pricey heat-resistant shell. 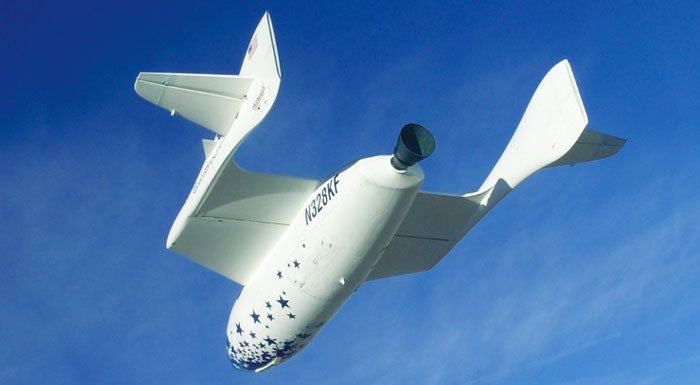 SpaceShipOne soared into space–and history–above the Mojave Desert in June. The feat made the Burt Rutan-designed craft the first civilian plane to reach suborbit and gave a much-needed boost to the fledgling space tourism industry. The plane’s radical design can easily be scaled up to hold more passengers, says Rutan.
mojave desert