One pilot, no gas and a nonstop flight around the world. 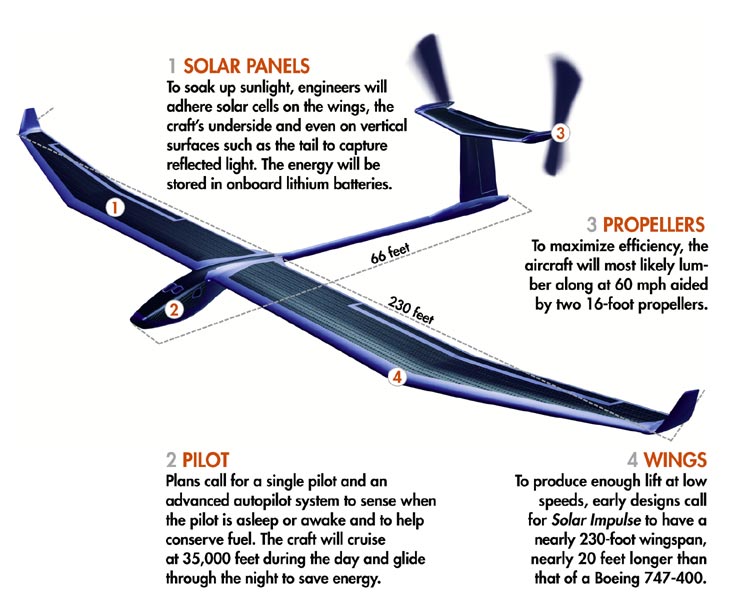 So now Piccard has dreamed up a greener–and far gutsier–aviation milestone to conquer: circling the globe in a solar-powered plane. “It would be the purest way to fly,” he says. Pure, yes; easy, no, notes engineer Paul MacCready
of AeroVironment Inc., who has consulted Piccard on his new plan–and pinpointed plenty of hurdles. The farthest a pilot has ever flown a solar plane is 163 miles, a record set in 1981 when MacCready’s Solar Challenger crossed the English Channel.

Undeterred, Piccard tapped the Swiss Federal Institute of Technology in Lausanne last year to help him design his dream plane, dubbed Solar Impulse. The team hopes to complete a prototype in 2006 [enlarge image, left] and conduct its first test flight the
following year.

Because Solar Impulse could take weeks to circumnavigate the globe, the biggest engineering challenge will be harvesting enough sunlight to keep it aloft overnight. One possible solution, according to project scientist Yves Leterrier, would be to plaster the underside of the aircraft with solar cells to snag reflected sunshine: “Any photon that we can capture is a good photon,” he says.