One mission to turn a high-speed comet into a piÃ±ata. 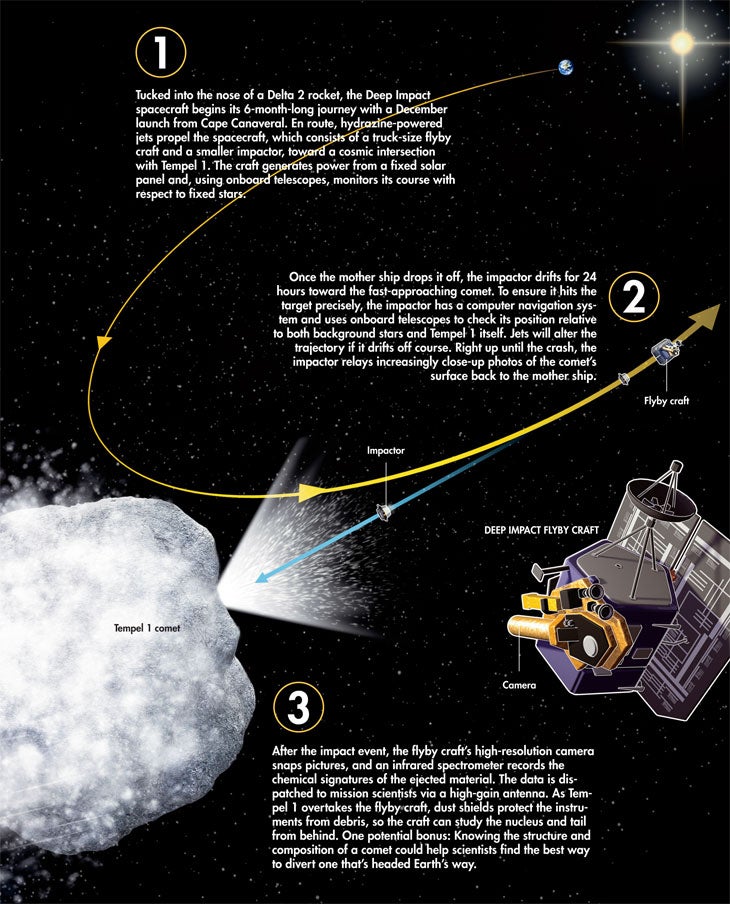 You’d think this mission was the brainchild of some mischievous teenagers who love mailbox baseball, but the attempt here is more like shooing a fly into the path of a speeding Hummer. Scheduled for a January launch, NASA’s Deep Impact will pull alongside the orbital path of comet Tempel 1 on July 3, 2005, when the comet is half a million miles away from Earth. The mother ship will release the impactor, a 793-pound copper-and-aluminum “fly,” which will drift for 24 hours as the comet closes in at 6 miles per second. The impactor will steer itself in front of a sunlit spot on the roaring comet and kaboom! Deep impact! With the equivalent punch of 4.5 tons of TNT, the minicraft could blast a cometary crater the size of an office building. The mother ship, looking back from a safe, 5,400-mile distance, will photograph the material ejected from the big splat to determine the contents of the comet’s nucleus. Called “dirty snowballs,” comets are a pristine mix of primal ice and dust left over from the early solar system. Knowing their ingredients may unlock the mysteries of planet formation. As of now, our understanding of comets is so rudimentary that principal investigator Michael A’Hearn says, “It’s not impossible that the impactor could just fly straight through the comet,” if the comet were a fluffy enough place. “There’s great uncertainty about the nucleus’s shape and rotation,” says A’Hearn–the comet core could be like a tumbling banana.