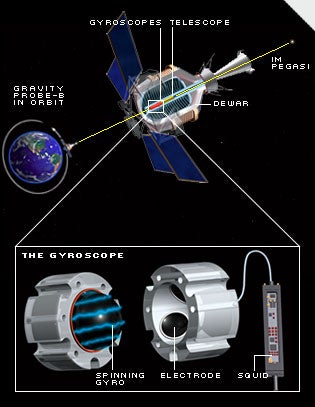 Among the many odd ideas born of Einstein’s theories of relativity, the one about twisted space-time certainly ranks high: A massive body like Earth creates geometrical dimples in space and, through its rotation, also pulls nearby space along with it. Astronomers verified the dimple effect back in 1919, but proof of the second, called frame dragging, has remained elusive. This month, some 87 years after Einstein cooked up his theory, NASA and Stanford University will launch an incredibly precise, $650 million experiment to put it to the test. After eight canceled launch dates, numerous technical setbacks and a few spectacular achievements–including the engineering of a spherical gyroscope so smooth that if it were enlarged to the size of Earth, its highest mountain would be a mere 8 feet tall–Gravity Probe-B (GP-B) is slated for launch on April 21.

That is, if all goes well. Most recently, GP-B stayed grounded because of a defect in the dewar, the high-tech thermos that keeps the gyros chilled to a few notches above absolute zero. Francis Everitt, GP-B’s principal investigator and master salesman (someone had to convince Congress) has endured all the setbacks and remains confident that GP-B will fly. “The gestation period has been longer than an elephant’s,” he said, “but the current launch date looks very rock solid.”

At the heart of the experiment: four ping-pong-ball-size gyros (one shown at right). Each gyro spins inside a spherical pocket with only 1/1,000 of an inch clearance. When cooled to 2C above absolute zero, the gyro’s niobium coating allows current to flow without resistance. Helium gas spins the gyro up to 10,000 rpm, and electrodes keep it levitating. The gyro’s spin axis always runs parallel to the north-south axis of its own magnetic field. The job of measuring the minute shifts in these axes falls to the Superconducting Quantum Interference Devices (Squids), which are essentially ultrasensitive magnetometers.

GP-B’s telescope maintains a stable sight line on the star IM Pegasi. If space were flat, the spin axis of each gyro would remain parallel to the telescope’s sight line. But if Einstein’s equations hold true, gravitational warping should tilt the gyro 0.14 degrees over a year, while frame dragging should nudge it 7/10,000 of a degree in a perpendicular direction–less than the width of a human hair viewed from 10 miles.

Einstein’s general theory of relativity says that massive bodies distort the shape of space-time. When light from a distant star passes another star, for example, its path curves because the star’s gravity has curved the surrounding space, not because the light itself is being pulled inward. This warping will also affect an orbiting body.
GP-B will be the first test of frame dragging, the theory that a massive spinning body twists the fabric of space-time. Like a whirlpool in water, Earth’s rotation doesn’t stir up distant space; the effect is greatest near the planet’s surface.