Slicing Up The Green Cheese

Who controls the Moon -- governments or gold-digging Internet homesteaders? 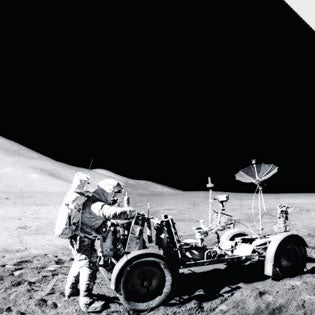 Panorama by Moonpans/from scans by the Lunar and Planetary Institute

George Bush’s plan to establish a manned United States base on the Moon by 2020 has been hailed as visionary, but to hear Dennis Hope talk, the president’s behind the times — a Manifest Destiny-style space land grab is already in full swing. Hope, the self-anointed “Head Cheese” and founder of the Lunar Embassy company, claims land rights to the moon, Mars, Venus, and a slew of other celestial bodies. To cash in on his apparent coup, he has appointed middlemen (“Lunar Ambassadors”) to parcel his space booty out to millions of Internet buyers. Forget naming a star after your significant other — for $19.99, Hope says, you can stake claim to one acre of lunar terrain and start saving up for a love nest with a view of Tycho Crater.

How can one guy snap up much of the potentially habitable land in the solar system? The answer, according to Hope: a couple of international-law loopholes. While the 1967 UN Outer Space Treaty states that territories beyond the Earth cannot be owned by national governments, the treaty does not specifically prohibit private individuals from making such claims. The UN attempted to remedy the omission in the 1979 Moon Treaty, but the new treaty was not ratified. One year after the Moon Treaty flopped, Hope wrote to the United States government, the Russian government, and the UN to declare his ownership of the moon. “If someone finds an unclaimed parcel of land and demonstrates intent to occupy, it’s theirs,” he says. However, Brian Chase, executive director of the National Space Society, dismisses Hope?s hopeful logic, since no national or international governing body has ever formally recognized the Lunar Embassy?s claims.

Hope’s followers may not be planting their space-themed lawn ornaments anytime soon, but if President Bush and other world leaders have their way, other lunar land-dwelling plans could come to fruition within the next few decades. Along with the U.S., Russia, China, and Japan have all expressed interest in the long-term possibility of setting up national bases on the moon. Though it might seem that competition between space superpowers could usher in an era of out-of-this-world colonialism, with nations drawing boundaries and squabbling over moon resources, space-program insiders say that won’t happen — or shouldn’t, if existing international laws are upheld.

According to the Outer Space Treaty, any countries that establish a permanent presence on the moon will have to solicit international cooperation in their endeavors, never claiming sole ownership of any territory. So far, space programs have been making their plans in this spirit. “Bush hasn’t indicated that he would want a potential moon base to be only for U.S. use,” Chase says. “Moon base plans will stay within the bounds of the Treaty as long as they don’t exclude involvement from other countries.” An expert in space law who declined to be named (due to ongoing legal wranglings concerning just these space property-rights issues) confirms Chase’s instincts, stating that the Treaty allows national exploration only if other states have open access to the territory and are encouraged to cooperate in any scientific investigation. He points out, however, that current legislation is murky when it comes to defining private citizens’ land-owning rights: “There’s still a question right now as to whether restrictions on governments owning outer space property are going to apply to individuals.” So while the legitimacy of a moon real-estate deed signed by Dennis Hope is questionable at best, there’s still a chance that Tycho condo could become reality a few decades down the line. You can keep dreaming, anyway.