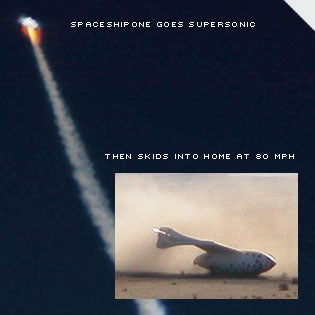 EYES ON THE PRIZE
Last July we reported on Burt Rutan’s master plan to jumpstart private suborbital space flight (“Burt Builds Your Ride to Space,” July ’03). This December, Rutan’s SpaceShipOne rocket became the first private manned aircraft to break the sound barrier. An ugly but safe landing did little to dampen the cheering.

The flight was a milestone on the way to Rutan’s goal of flying the craft to an altitude of 328,000 feet (100 km) and winning the $10 million X Prize. The rocket plane dropped from White Knight at 48,000 feet; Binnie lit the motor, pulled into a 60-degree climb, and went supersonic 9 seconds after ignition. The acceleration pushed Binnie back into his seat with three times the force of gravity. He continued to pull up — another two and a half Gs pushed down on his body — and the motor shut down 6 seconds later, with the plane in a vertical climb.

SpaceShipOne coasted upward, gradually slowing due to gravity, and came to a near-total stop at 68,000 feet. Binnie raised the craft’s unique “feather” — a flip-up tail designed to stabilize it in a vertical descent — and went into free fall for about 60 seconds before folding the tail down for an airplane-like gliding descent.

All went well until a control problem led to a heavy landing, an excursion from the Mojave, California, runway, and broken main landing gear. Graceless touchdown aside, the flight showed that the rocket motor works, that the plane can be handled at supersonic speed, and that it can transition from zero speed to a stable “feathered” descent. After repairs, the craft is expected to resume flights with longer rocket burns, higher altitudes and greater speeds.

Popular Science: What were the big lessons from the flight?

Brian Binnie: The motor had no trouble lighting off at altitude, which we’d never done before. The performance was pretty darn close to the simulator predictions.
So our drag models are close to real life.

You flick the fire switch, the motor takes less than a second to ignite, and
it’s like winging open the gate at a rodeo. Boom! You and the bull are off! When the motor shut down, I found that I was breathing really hard.

How did the ship behave in zero G?

Zero G was the most pleasant part of the trip. I remember thinking, “Let’s stand by for some gyrations,” but it was quiet and benign. If there’s one thing that’s really slick,
it’s the feather capability.

You had an event on landing.

It wasn’t bad for a Navy guy. I’m on the last 10 seconds of approach and get caught in a roll oscillation. I relax the back pressure on the stick and the roll goes away, but the runway is getting closer and I have too much descent rate. Burt was a real champ. He looked at it and said, “We can fix that.”