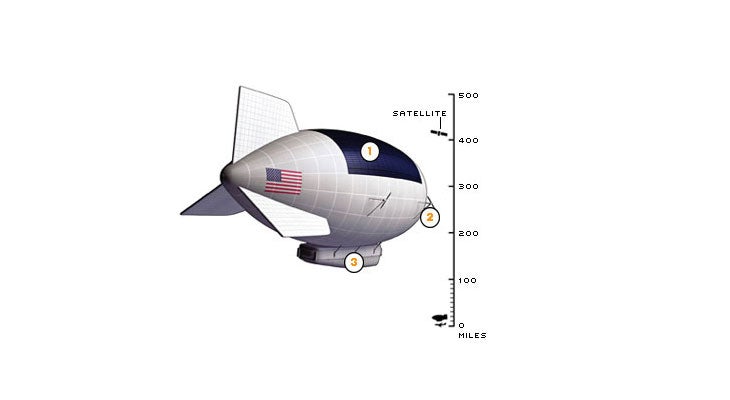 Being oversize has its advantages. Just ask researchers at the U.S. Missile Defense Agency, which recently dished out $40 million to arms maker Lockheed Martin to design what could soon be the world’s largest pilotless airship. Measuring 500 feet long, with a volume of 5.2 million cubic feet, the prototype high-altitude airship, or HAA, will be 25 times larger than the Goodyear blimp.

From a military perspective, such an XXL craft may seem like an inviting target, especially since its top speed is only 80 mph. However, parked 12 miles up, it will be immune to most ground-launched missiles, and its onboard sensor systems will “see” at least 350 miles in any direction, allowing
it to spy most incoming military threats. A fleet of 10, says the MDA, could provide an early-warning curtain for the continental United States.

Compared to high-altitude unmanned aerial vehicles, such as NASA’s ill-fated Helios, the airship should be able to carry a heavy payload; its 4,000-pound capacity makes it ideal for toting heavy surveillance and communications equipment. Another big advantage: HAA’s solar panels and fuel cells will allow it to loiter above the jet stream in a geostationary position for up to a year, something no drone or spy plane can do.

The helium airship will generate enough electricity from thin-film photovoltaic solar cells to power the engines and generate at least 10kW for the payload. On the prototype, batteries keep the juice flowing at night, but production airships will use lightweight fuel cells.

Four electrically powered engines, each driving two 30-foot-wide blade propellers, will provide forward thrust. The “steerable” propellers will help keep the airship within a mile of its assigned location.