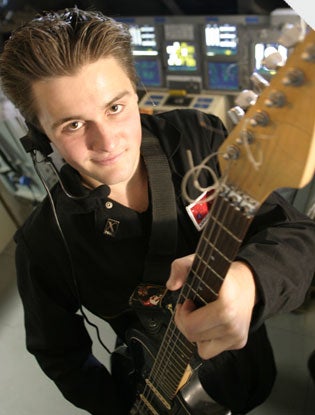 In a bid to become the first teen in space, 18-year-old Justin Houchin has booked a berth on the Solaris X. Interorbital Systems (IOS) is building the rocket to compete for the X Prize, the $10 million jackpot for the first civilian team to put humans into space on a reusable vehicle. Even though IOS has yet to launch a rocket — let alone a human — higher than 10,000 feet, they’re already selling tickets for 25-minute suborbital rides.

Popular Science: How are you preparing?

Justin Houchin: The ticket is $50,000, and I’m hoping to get cosmonaut training in Russia, so I need to raise a good amount of money.

PS: Are you nervous?

JH: The capsule can separate and land on its own if something goes wrong. And the people at IOS will be riding the rocket too. So it’s in their best interest to make it safe.

PS: What do you do for an encore after the space trip?

JH: Make movies. I’m definitely not going to let this astronaut thing be the peak of my career.