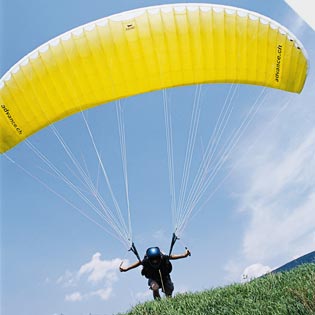 The writer charges forward to fill his paragliding canopy with air.

A funny thing happened at New York’s Belleayre ski resort in September 1965: A man launched himself into the sky with a parachute. The man was David Barish, a NASA aeronautical engineer who, a year earlier, had conceived a parachute for bringing Apollo spacecraft back to Earth. By adjusting a few key elements in its design to make it suitable for human flight, and then testing it himself, Barish unwittingly became the grandfather of a sport that thousands of flat-footed, gravity-challenged, slightly crazed humans now call paragliding.

Personally, I don’t understand how he ever got off the ground. I’m standing in the middle of a sunbaked field at the Mount Brace flight park in upstate New York–just 70 miles east of Barish’s first flight–sweat rolling down my chin, bruises multiplying on my arms. For the hundredth time today, I charge forward, and for the hundredth time my paragliding canopy fills with air, wobbles, and then collapses, spilling me hard onto the grass.

“The wing wants to fly,” says my instructor in a Zen-like tone. “You don’t have to force it.” He points to a paraglider circling lazily overhead. It looks so easy.

And there lies the irony: Paragliding is arguably the most basic form of human flight, requiring little more than a glider canopy, a harness and an utter lack of fear. But it’s also one of the most difficult to master. Not only does one have to learn the intricacies of controlling the paragliding canopy–an elliptical, low-porosity bag of ripstop nylon that, when inflated, forms a pressurized wing with flight characteristics similar to those of an airliner–one also has to be taught how to exploit sources of atmospheric lift, like thermals, to stay aloft. And in my experience, the learning curve
is painfully flat.

My problem isn’t with inflating the wing–it fills with air each time I charge forward–but rather with controlling it. A slight change in wind direction might collapse one side, or I’ll confuse the A-lines–which manage the flow of air into the wing–with the brake lines and end up getting dragged across the field. “It’s all about finesse,” explains my instructor, unhelpfully. “An experienced pilot can feel the wing.”

Drenched in sweat, head spinning, I run to the edge of the training hill one last time, and let go of the A-lines. My canopy fills with air. Suddenly–miraculously–I’m flying. The canopy ripples overhead, carrying me 20 feet above the meadow, weightless as a feather. Feet dangling, I glide silently toward the tree line, feeling the wind in my fingers as it sings through the control lines, flows over the wing, and tugs on the brake handles. So that’s what my instructor meant by “feeling” the wing.
The flight doesn’t last half a minute, but it’s enough. I touch down in the meadow, gather up the paragliding canopy, and race back up the training hill, exhausted, exhilarated, ready to do it all over again.

Cost to Learn: About $1,500 for a novice certification (roughly five days).

Get a License: You don’t need a license to fly, but the United States Hang Gliding Association recognizes four proficiency levels (beginner to advanced).

Web sites: USHGA provides a nationwide listing of clubs and training centers, as well as a calendar of events.