After eight months in general aviation, our man goes airborne in a glider to rediscover the essence of flight. 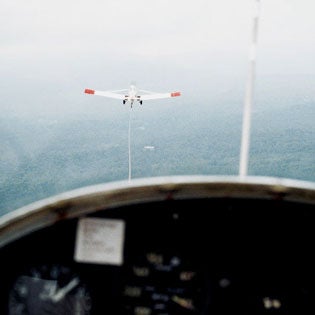 Lacking an engine, gliders must be towed aloft (above); sleek aerodynamics (below) allow them to ride thermals like elevators.

“What’s to be afraid of?” my gliding instructor, Bruce Stein, asks. “The worst thing that could happen in a powered aircraft already has: There’s no engine. But you’re still going to fly.”

Stein and I are standing on a half-mile swath of grass in Freehold, New York, contemplating taking to the air in a two-seat fabric-and-tubing glider called the Schweitzer 2-33A. For today’s ride–the first in my pursuit of a glider’s license–we’ll just circle a few times to get a feel for the thing. Later I’ll learn to find lift, the glider pilot’s only way of postponing the inevitable return to earth. Noticing me eyeing the cumulus building to our west, Stein gives me a preview: Convective activity means thermals, which we’ll ride like invisible elevators. “We love the weather that powered pilots hate,” he says.

My first takeoff is a blur–all concentration goes to staying on the tail of the tow plane, which we’re attached to by a 200-foot rope. But when we hit 3,000 feet, it’s time to go natural: I pull the rope-release knob, and we’re soaring.

Because of the glider’s long wingspan, banking turns push the nose in the wrong direction; it takes some heavy rudder use to yank it around. And since the instrument panel lacks such avionics as a turn-and-slip indicator, artificial horizon and gyro, the only way to gauge whether I’m executing textbook turns is by a piece of yarn in front of the windshield (if it flutters straight back, I’m golden). I don’t have much time to practice, though; 15 minutes after takeoff, we’re back on the runway.

There lies the rub of motorless flight. Watching the scenery roll gently underfoot, I’m reminded why I took up flying to begin with: to feel the freedom of the empty sky. But with that freedom cut so short, I’m left wanting engines. Bring on the thermals.

Get a License: 10 hours of flight time (including 20 training flights and 2 hours of solo gliding).

Web sites: The Soaring Society of America is a one-stop shop
for flight schools, events and the latest gliding news.