What it takes to build a behemoth 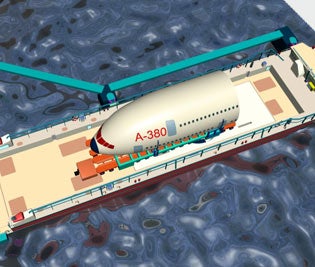 An early design of one of the massive transports needed for shipping sections of the A380’s massive body.

The Airbus A380 will be the largest production aircraft ever to fly–and one of the most complicated to assemble. All Airbus airplanes, including the A380, are built section by section in specialized factories across Europe. The wings come from the United Kingdom, the horizontal tails from Spain and the major body parts from Germany. Airbus’s specially built, fat-bodied Beluga jets fly the sections into Toulouse, where final assembly takes place, but even the Belugas won’t be able to accommodate the A380’s wing and body. Instead, a 500-foot roll-on, roll-off (RoRo) ship will make a weekly milk run to Airbus plants in Hamburg, Germany, North Wales, England, and western France, collecting a set of parts for each airplane and delivering them to Bordeaux. Next, trailers carrying the airplane segments will be loaded on to barges for a 12-hour voyage up the Garonne river–using variable ballast and GPS guidance to negotiate Bordeaux’s low and narrow Pont de Pierre bridge. At Langon, Mercedes tractors with special mufflers will tow the trailers to Toulouse on a combination of new and existing highways.