How to Make a Faster Fighter

Our photographer goes behind the scenes at Lockheed. 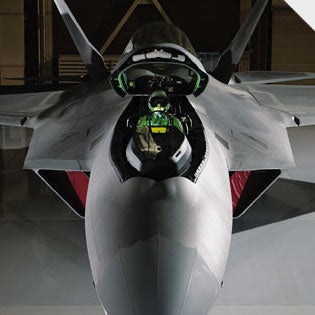 A completed F/A-22, Air Force Maj. Mike Hernandez at the controls, awaits testing at Nellis Air Force Base in Las Vegas. They won’t be in service until 2005, but the 20 Raptors built so far fly constantly in intense evaluation programs.

Better, faster, more expensive: In Marietta, Georgia, 1,400 Lockheed Martin workers are assembling the first F/A-22 Raptor fighters from parts made by 700 companies in 43 states. Some call the airplane a $120-million boondoggle. Others say that’s the price of invincibility. This is how the fighter of the future is built.

Lockheed Martin won the right to build its F/A-22 Raptor in April 1991, after an intense and controversial competition. (Some still believe that the loser, Northrop Grumman’s YF-23, was a better aircraft.) Designed for both air-to-air combat and ground attack, the Raptor will enter service with the U.S. Air Force in 2005 and is expected to define the future of air combat for the next half century.

Delays and cost escalations–each airplane runs $120 million, versus only
$35 million for the new F-35 Joint Strike Fighter, also built by Lockheed–make the F/A-22 a frequent target of budget cuts and criticism. Opponents say the United States will never face the kind of air threat once posed by the Soviet Union. Supporters argue that the F/A-22 is essential because its speed and altitude will enable it to evade the surface-to-air missiles to which the F-35 remains vulnerable. Also, the F/A-22’s stealth and long-range sight capability, provided by a new suite of advanced avionics, make it largely immune to fighter attack.

Approximately 28,000 people work on the Raptor program in a given year, with subcontractors producing fuselage sections, wings and any of the scores of individual onboard components. Only 1,400 of those workers are in the Marietta final-assembly facility. Security at the plant is tight–uncleared visitors
are escorted by security personnel carrying flashing red “leper lights.” The workers are meticulous about craftsmanship and attention to detail: No Raptor will get turned over to the Air Force until each component has been tested and confirmed multiple times.

BIO OF THE BIRD