Long grounded by the hurdles of flight training, our aviation editor finally takes to the sky. 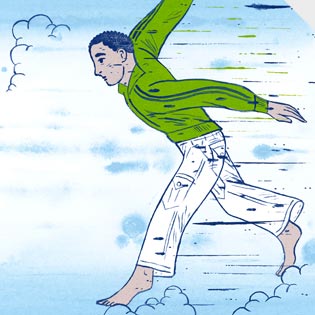 The moment is here–I’m going to fly. The runway’s heavily skid-marked surface extends for a mile in front of me, then stops dead. Beyond it is … well, infinity, and all the airborne thrills and adventures it has to offer. But infinity begins with trees, houses, hills and countless other obstacles that don’t interact well with airplanes. Staring down the tarmac, sitting at the
controls for the first time, I wonder if my instructor has any idea of how bad I’m going to be at this.

At least, I’m assuming I’ll be bad. There’s no proximal experience to
piloting an aircraft; no way of knowing if you have the slightly less macho,
general-aviation version of the Right Stuff until you actually get behind the controls and put some air between yourself and the ground. Though I love flying (albeit as a passenger thus far) and I love airplanes, concerns about the cost (up to $8,000) and time commitment (three months to a year) of earning a pilot’s license have kept me grounded. The Be a Pilot program, which offers $49 introductory flight lessons at schools nationwide, was just the prod I needed to get me in the cockpit.

More than 40,000 would-be pilots have taken advantage of the program, giving an added boost to a recent surge in general aviation, which encompasses everything from this Cessna 172 up through corporate business jets. Part of the surge stems from the increased hassles of business flying, and part is due to a recent outpouring of new GPS-
navigation, digital-instrumentation, and aircraft-systems-management technologies that are making it easier, safer and substantially more enjoyable to fly.

To get your license, though, you still have to master the basics, like analog instrument panels and paper charts. That’s why I’m here with Stefan Keller, a 33-year-old instructor with Av-Ed in Leesburg, Virginia. With our little airplane just quaking in anticipation–its propeller whipping around 1,000 times per minute in idle–I apply full throttle and hurtle down the runway. At 55 knots, I pull back on the yoke–suddenly it’s all treetops and rooftops.

We scan the skies continuously for other airplanes as we climb to 4,000 feet–one eye always on the instrument panel. “The biggest challenge is multitasking while maintaining situational awareness,” says Keller. “We’ve turned several times since taking off–do you still know where the airport is?”

Barely–so Keller puts me through some more turns. “Every time you turn, you lose vertical lift, so your nose drops,” he says. “Pull back on the yoke so you don’t lose altitude.” Next we work on “coordinated” turns, using the rudder to prevent skidding.

After an hour in the air, Keller points me back toward Leesburg, where he takes the controls and puts us down on the centerline. The experience has been awe-inspiring–the feeling of motion, the sense of control, the new perspective. That, according to Drew Steketee, CEO of Be a Pilot, is what keeps pilots in the air. “There’s a shift in perception up there,” he says. “It’s the difference between taking in a comprehensive view of the world and staring at the back of a trailer truck.”

Web sites: The Be a Pilot program features a flight school database; Aircraft Owners and Pilots Association has it all, from learning-to-fly faqs to aviation news.