Aloft in a Go-Cart with Wings

What do you get when you cross an airplane with a hang glider? The most sensational craft on three wheels. 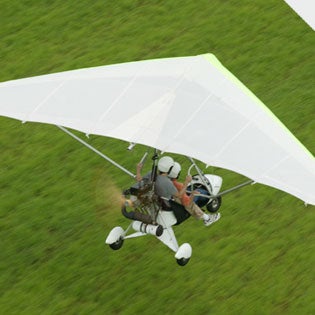 Without so much as a pane of glass separating pilot from sky, trikes offer an extraordinarily palpable sense of speed.

Maybe it’s that the minuscule plane I’m flying is almost entirely obscured by just two sets of legs (mine and my instructor’s). Maybe it’s that not a pane of glass or sheaf of steel separates us from the sky beyond. Or maybe it’s simply the glaring lack of aeronautical controls in what passes for the cockpit. Whatever the reason, I can’t believe this bare-bones contraption stays aloft, or that I’m the one flying it.

But that’s the beauty of a trike. Minimalist in nature, and easy to fly, these go-cart-style aircraft are fast becoming the Everyman’s avenue into motorized flight. All the more so now that the FAA is considering legislation that would regulate them and offer licenses to their operators for the first time. With just 20 hours of flight training, I might become an FAA certified pilot.

My instructor, Martin Beckenbach, doesn’t waste any time. No sooner do I arrive at the Finger Lakes Aerosport Park in Macedon, New York, than he escorts me to my ride: A Gibbogear BB trike with a Rotax 503 engine. I strap into the backseat and secure my helmet; Beckenbach tucks his feet into the tiny nose cone and pulls the cord to the propeller. With the prop screaming behind us, he jams the accelerator pedal, and we roar down the grass runway: 20 mph, 30 mph, 40 mph–We’re flying!

Lesson 1 is how to control the aircraft. Beckenbach says that his worst students are those with stick-and-rudder experience (in which left means left, and right actually means right). For them, the weight-shifting operation of trikes is entirely counterintuitive. Pushing the wing bar to the right and shifting our weight to the left, we execute a left turn. Opposite for the right. Pushing the bar forward tips the wing up, causing it to catch more air and slow us down. Pulling the bar back levels the wing and accelerates the trike to 55 mph. To gain altitude, Beckenbach hits the gas to accelerate the prop. “But you don’t need it otherwise,” he says, reminding me that trikes evolved from hang gliders. “It will glide safely to the ground even if the engine fails.”

After three hours I’m hooked, and even more excited by the prospect of the FAA’s Sport Pilot initiative. It will allow anyone with a driver’s license and 20 hours of instruction in sport aircraft (powered airborne vehicles weighing less than 1,232 pounds) to obtain a federal airman’s license. Two notable benefits: The ability to carry passengers (currently, only instructors can do so) and get insurance. “It’ll bring a lot more people who never thought they could be pilots into the sport,” says Joe Norris, senior aviation information specialist for the Experimental Aircraft Association, which supports the legislation.
Count me among them. Just 17 hours to go.

Get a License: 20 hours of instruction (if the FAA passes the Sport Pilot initiative).