Several futuristic aircraft in this issue look not only real but well used. It's all a matter of canny computer rendering. 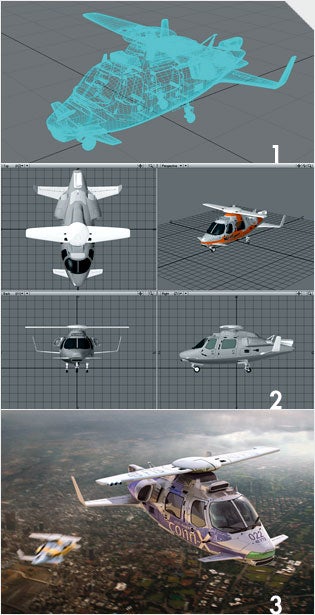 Boeing and others are working on the canard rotor/wing VTOL concept. The rotor spins for vertical takeoff, then converts to a fixed wing for forward flight, ideal for the air taxi systems predicted to launch in the 21st century. To render photo-quality illustrations of aviation concepts for this issue, we turned to The Embassy, a video-effects firm. Here’s how visions of the future are engineered.

1. To build an air taxi, Embassy artists first shaped the craft’s overall form, working from existing concept drawings and their own imaginations. Each structural element was modeled as a blue mesh in LightWave 3D, which runs on a 2.4GHz dual-processor Pentium with 2GB of RAM.

2. Surface textures came next. Digital photographs of actual airplanes were used to create texture maps. To the 3-D mesh, artists applied various surfaces-aluminum, glass, paint-each with its own specific opacity and roughness. Then they added an artificial light source and rendered the image.

3. The team checked the air taxi by eye to make sure each part of the aircraft was reflecting light convincingly. Using Photoshop, they tweaked the image, adding grime, water stains, chipped paint and logos (the future will be a bit messy, they predict). Finally, they cut and pasted the image onto a background.