Dave Minto oversees hyper-speed ground tests of everything the Air Force shoots into the air. 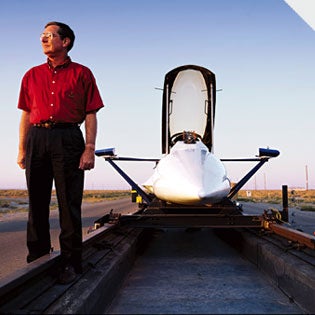 WHITE LIGHTNING
Dave Minto stands in front of an F-16 forebody, which will have its canopy ejected at 691 mph to test the wind-blast durability of its head-up display.

JOB: As technical director of the High Speed Test Track at the Holloman Air Force Base in New Mexico, Minto oversees hyper-speed (over Mach 5) ground tests of everything the Air Force shoots into the air–from ejection seats to prototypes for anti-ballistic missile delivery systems.

WORKPLACE: 50,880 feet of rocket sled track in the middle of the Tularosa Basin. “We’re the stop between the lab and a full-up flight test,” Minto says. The track allows Minto to record the exact speed, trajectory and impact physics of two missiles smashing into each other in the stratosphere–without ever leaving the ground, or losing the pieces. “Plus,” he says, “on the track, we never miss.”

CURRENT PROJECT: Testing a 192-pound anti-ballistic missile warhead prototype for the Missile Defense Agency. On April 29, 2003, the sled carrying this payload covered 3 miles in about 6 seconds, with a top speed of Mach 8.7 (6,453 mph), shattering the previous land speed record of Mach 8.1 set at the Holloman track 20 years earlier. In the process, the team recorded the most realistic ground simulation to date of an anti-ballistic missile system.

PRIME CHALLENGE: Breaking Mach 5 on the ground involves very different challenges than it does in the upper atmosphere. For one, the air is thicker, and at hypersonic speeds it can generate enough frictional heat to melt steel. Then there’s the sliding contact between the track and the steel sled slipper–it produces vibrational and impact stresses that lead to inaccurate simulations. To minimize these stresses, Minto and his team upgraded the track’s old monorail system to twin, narrow-gauge rails with less “clickity-clack.” But later this year they plan to begin testing the ultimate solution: a track that features magnetic levitation.

FINAL WORD: “You know when you were a kid and you liked to take your model airplanes and burn them up? The government pays me to do that on a big scale–there’s smoke and fire and things go bang.”