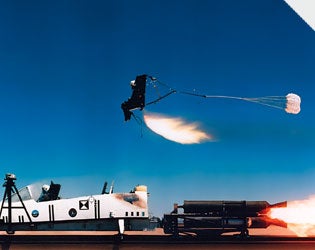 A test of Martin-Baker’s Navy Aircrew Common Ejection Seat from the fuselage of an F-14D Tomcat, China Lake, California.

In “Get Out Now!” [Oct. ’03], Stephan Wilkinson tells the history of fighter-plane ejection seats starting from the early 1940s, but high-altitude escape technology actually reaches back at least five centuries. Professional skydivers Katarina Ollikainen and Adrian Nicholas recently teamed up with an art historian to construct in painstaking detail a parachute designed by Renaissance artist and inventor Leonardo da Vinci.

The parachute didn’t appear to be much more than a doodle in the margin of a series of his designs for flying machines. It”s a simple sketch of a man dangling from what looks like a conical tent. “It”s one of those tantalizing throw-away things that appears in his notebooks with no follow-up,” says Martin Kemp, the Oxford University art historian who worked on the project.

But for Ollikainen and Nicholas, who were living near London at the time, the design represented an opportunity to make skydiving history. “Everybody that skydives has seen this little sketch,” Ollikainen says, “But we wanted to build it.”

Three years ago, with Kemp”s help, the two converted da Vinci”s measurements for the chute from bracchia into modern units. As it turned out, da Vinci”s proposed height for the pyramid was 7 meters. Once clear on the specifications, Ollikainen set her mind to the more difficult task of procuring materials. She and Nicholas wanted to use only what would have been available to da Vinci. That meant hemp rope, not the current nylon-based standard, and untreated cotton for the canvas sail. Kemp vetted each bit of material. “We”d send him something and he”d say, ‘This is not good,” ‘This is OK,” ‘This is better,”” Ollikainen recalls.

Finding the materials took just over a month, Ollikainen says, but building the chute took only a few days. The next step, of course, was testing it. None of their skydiving colleagues thought it would work. The pyramid-like design was a drastic departure from modern parasol-shaped chutes, and da Vinci didn’t call for any apertures, or openings in the canvas–another current standard. “All educated opinions suggested that it couldn’t possibly work,” Nicholas recalls.

But on June 25, 2000, a hot-air balloon lifted the da Vinci chute over Mpumalanga, South Africa. Nicholas and Ollikainen chose this spot for its favorable skydiving weather–low winds and clear skies. As balloon and chute ascended, Nicholas dangled from the bottom, just as Leonardo specified in his sketch. At 10,000 feet, chute and man were released.

The descent was comfortable and the parachute steady, Nicholas says. Spectators waved as he coasted overhead, dropping at a comfortable rate of 14 feet per second. His faith in the supreme Renaissance man had limits, however. At 2,000 feet, Nicholas cut away from the da Vinci chute and descended with a modern one. “[Leonardo] never promised not to land you in a tree,” Nicholas remarks. But Nicholas”s caution turned out to be unnecessary. After he bailed, the chute continued its leisurely descent and touched down intact.

The model da Vinci chute is now on display at the British Library, and Ollikainen and Nicholas are still proud of their successful project. “It was very romantic for us to complete an experiment that started 500 years ago,” Nicolas says.