Galileo will hit near the equator on Jupiter's far side. 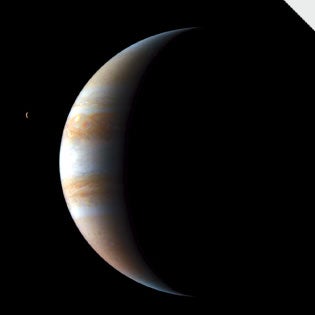 by Courtesy NASA/JPL/University of Arizona

Galileo, the interplanetary spacecraft that has changed the way we understand Jupiter and its 61 known moons, will perish on the 21st of this month as it plunges into the Jovian atmosphere. NASA engineers have put Galileo on a collision course with the planet so that the spacecraft, which is running low on propellant, can study the Jovian magnetosphere as a final task. The suicide mission will also ensure the craft won’t end up crashing into–and possibly contaminating–the ocean of Europa, one of Jupiter’s moons.

That we know Europa has water at all, and that we fear contamination of any possible ecosystems that may exist there, are both testaments to what Galileo has taught us since it arrived at Jupiter in 1995. Its mission was originally designed to last for only two years, but in 1997, NASA extended its tour for an extra 14 orbits around the planet. During this second stint, Galileo discovered that liquid water probably still exists under Europa’s icy surface. It was a discovery of the sort that the craft’s eponym, Renaissance astronomer Galileo Galilei, was also famous for: It taught us that Earth is not as special as we thought. The spacecraft also imaged thunderstorms in Jupiter’s atmosphere and volcanic plumes jetting 300 miles above the surface of another of Jupiter’s moons, Io.

This month’s impact takes place on the far side of the planet and will be monitored by NASA’s Jet Propulsion Laboratory in Pasadena, California. Galileo is survived by the Cassini spacecraft, which will arrive at Saturn in July 2004.