Asteroids: Blinded by the Light

Lasers may one day be our first line of defense for finding and fighting asteroids. 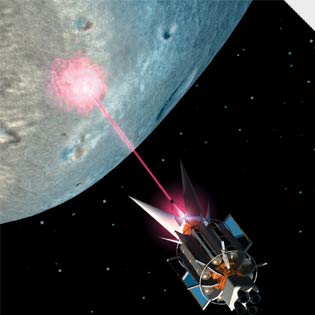 Beams from lasers stationed in space or on the moon may be used to redirect asteroids.

Of the many unusual plans for saving the world from an asteroid or comet impact, which include everything from solar mirrors to soldier spacecraft, two scifi-like laser-based systems could prove to be the best. NASA scientists say that their plans for laser detection and deterrence would require as little as six months notice to find an incoming object and push it off course. This quick response ability is critical, seeing as an asteroid missed the Earth by only 75,000 miles in 2002, and was detected only after it had passed.

Dan Mazanek, a scientist at NASA’s Langley Research Center, is working on the Comet/Asteroid Protection System, which would integrate lasers to improve the first phase of the challenge–finding and tracking incoming objects. Currently, lasers powerful enough to fulfill Mazanek’s requirements do not yet exist, but he hopes CAPS could be implemented within the next 20 to 40 years.

Jonathan W. Campbell, a scientist at NASA’s National Space Science and Technology Center is exploring the use of lasers for the second phase of the challenge–deterrence.
What makes laser deterrence different than other options, such as solar sails or chemical rockets, explains Campbell, is its ability to work in a much shorter time frame. “One of the problems that we’re facing with NEOs is early warning and detection. Some of these we’re only seeing just before or after they pass, which is not good. What lasers would allow us to do is have a shorter response time.”

Unlike reflected solar radiation, which tends to fan out in all directions, lasers deliver intense, focused beams that could push the asteroid from huge distances. With lasers, therefore, you don’t have to fly out to meet the space rock, thus saving precious time. In Campbell’s simulations, a 1 km object can be diverted in one month, given six months notice of its approach–not the years or even decades necessary for other systems.

In Campbell’s Laser Earth Defense system, an array of lasers would be placed on the Moon, powered by a “solar farm”–acres of solar panels that can convert sunlight to energy. A moon-based system would have unobstructed access to the open sky, with no clouds or storms to limit a laser’s effectiveness. When an asteroid is detected (either by today’s traditional telescopes or, in the future, by laser tracking systems), the laser would fire pulses at the object, at a rate of about 100 per second. Each pulse would vaporize a thin layer of the asteroid’s surface, creating a hot, expanding gas that pushes on the asteroid. Several weeks and millions of pulses later, the laser would nudge the asteroid enough so that it would safely bypass the Earth.

Given further progress with laser technology, Campbell thinks his concept will work, but he’s quick to note the importance of developing a multi-layered infrastructure for combating NEOs. “We need a multitude of options. The laser option is just one of several. People sometimes ask, ‘Which option is best?’ And I say, ‘They’re all good; we need to do all of them.’ We’re talking about saving civilization here.”