Proving Once Again that Flying is a Dangerous Business

Ken Hyde learned how tough Wright flyers can be: He crashed. 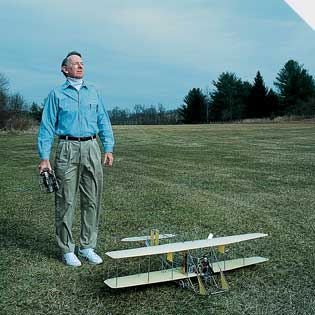 WRIGHT DREAMER
Ken Hyde learned how tough Wright flyers can be: He crashed.

Ken Hyde, the retired American Airlines pilot who was building from scratch reproductions of many of the Wright brothers’ early planes, crashed a replica of the 1911 Model B in May, damaging the plane and breaking his wrist in the process. The crash happened as Hyde was testing the plane’s taxiing capabilities. He found himself heading for a ditch and lifted off to avoid it. When maneuvering the plane back to the landing strip proved impossible, he “landed” the craft in the trees.

We first reported on Hyde last year [“Rebuilding the Genius Machines,” June ’02], chronicling his quest to meticulously reconstruct many of the Wright brothers’ planes in time for the 100th anniversary of the first flight this December. Hyde remains optimistic the plane can be repaired.