NASA draws up blueprints for a deep-space mission simulator. 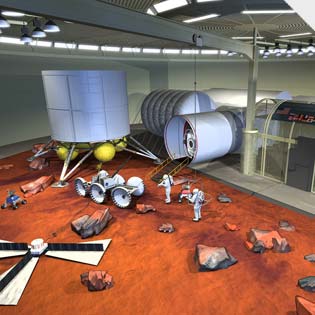 On August 27, Mars will be closer to Earth than at any point in the past 73,000 years. That’s good news for amateur astronomers (see What’s New), but it won’t make a manned mission to the Red Planet any easier. For that, NASA has earmarked an initial $2 million to build the Integrated Human Exploration Mission Simulation Facility, dubbed Integrity, at Houston’s Johnson Space Center.

Integrity is an all-inclusive, deep-space mission simulator that will house mock transit, habitation and landing modules, complete with waste-, air- and water-recycling technologies. Astronauts will grow food in a Martian greenhouse and test new suits and rovers on a mock-Martian landscape. Even the soil will mimic the Red Planet’s, enabling NASA to experiment with both robotic and human-operated drills, and monitor whether or not astronauts carry dangerous dust past the surface module’s air lock.

Besides testing specific mission scenarios, Integrity will also inform R&D efforts, allowing NASA to prioritize technology investments. The bean counters will also be pleased to know that Integrity will improve budget forecasting. “We’ll know what it’s going to take,” says program manager Don Henninger. The facility could be ready as early as 2008. Since a manned trip to Mars isn’t likely within the next two decades, that should give astronauts plenty of rehearsal time.