The Revolution Will Not Be Piloted

Hydrogen-powered UAVs in the works 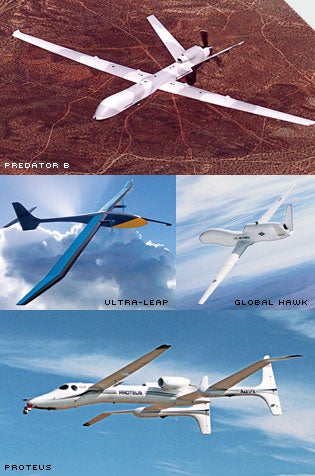 High-altitude Unmanned Aerial Vehicles (UAVs) could soon be capable of staying aloft for weeks at a time, providing telecommunications services or gathering military intelligence over a future battlefield.

Gasoline and jet-fueled military UAVs are already in the skies, but an ultralong endurance UAV is now being developed by the Defense Advanced Research Projects Agency (DARPA) and Boeing. This revolutionary unmanned aircraft, called Ultra-LEAP, will be powered by fuel cell-based propulsion systems similar to those that will run some of the hydrogen-powered, non-polluting cars of the future.

Ultra-LEAP will run on electricity generated in a fuel cell by a chemical reaction between gaseous hydrogen and oxygen that strips electrons off hydrogen atoms and creates current. The engine spits out drops of water instead of the carbon dioxide and other pollutants generated by burning gasoline or diesel fuel.

Currently, Boeing is designing a 737-sized twin-propeller-driven UAV with a 150-foot wingspan. It looks like a giant glider with high-aspect-ratio wings. Carrying a 250-pound baseline payload, the lightweight UAV would cruise at 60,000 feet. The just-completed first phase of research included design of the fuel cell-based propulsion system and risk-reduction studies. In the second contract phase, scheduled to begin this year, Boeing will build and demonstrate a complete propulsion system. If all goes well, the firm will build and fly two all-composite prototypes of the Ultra-LEAP UAV in the third phase, with aircraft fabrication anticipated within the next two years.

The closest thing to the Ultra-LEAP is the NASA/AeroVironment Pathfinder Plus solar-electric flying wing. It will employ a regenerative fuel cell-based energy storage system, allowing the UAV to fly nonstop at lower latitudes for up to six months. An alternate energy storage system combines stored hydrogen with oxygen collected from the atmosphere. It will allow the UAV to fly for one to two weeks at all latitudes any time of the year. Both systems will provide electrical power at night.

One eventual goal is the widespread use of UAVs-high-altitude or otherwise-for scientific and commercial applications. But the full potential of UAVs cannot be realized until they demonstrate the ability to operate safely within the existing air traffic management system.

NASA and industry researchers are taking steps to enhance the prospects for widespread use of civil Unmanned Aerial Vehicles (UAVs), combining forces to develop Detect, See and Avoid (DSA) technologies that will allow manned and unmanned aircraft to co-exist in the skies.

Confidence is growing in the wake of recent successful flight testing sponsored by NASA Dryden Flight Research Center near Mojave, California. The flight evaluation involved Scaled Composites´ optionally piloted Proteus aircraft with safety pilots on board but controlled from the ground like a true UAV, and a wide range of manned aircraft, including a high-speed NASA F/A-18, general aviation aircraft and an unpowered sailplane.

Researchers showed that a ground-based UAV pilot could detect non-transponder equipped intruder aircraft using a radar mounted on the Proteus. (Transponders emit signals showing the position of aircraft. The radar was originally developed to warn low-flying helicopter pilots of power lines in their flight path.) The idea was to spot approaching aircraft on a potential collision course within a six-nautical-mile range.

In all cases, the UAV pilot was able to detect the presence of conflicting aircraft, maintaining safety margins. The recent flight tests follow a series last year near Las Cruces, New Mexico, in which Proteus used a commercially available traffic collision avoidance system to stay away from transponder-equipped intruders. The ability to sense and avoid conflict is a key step toward allowing UAVs to fly routinely in civil airspace.