"Are there any new fuels being used in rockets, besides the stuff that goes into solid rockets?" 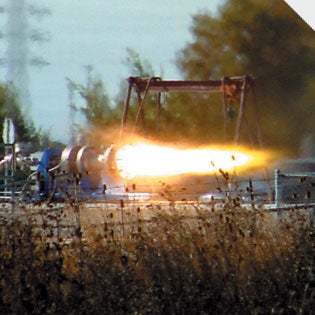 Reader Jim Gannon of Kansas City, Missouri, asks: “Are there any new
fuels being used in rockets, besides the stuff that goes into solid rockets?”

Like so many other questions one could ask about space travel, the
answer is not yet, but soon. All current military, commercial and scientific launches use decades-old rocket technology. The most popular is a solid rocket booster, so called because its oxidizer and fuel–a blend of volatile and hazardous chemicals–are pre-mixed inside the rocket, where they cure into a solid. Once fired, these rockets cannot be shut off or even throttled down. At its core, launching a manned
capsule or satellite on a solid rocket booster is the space travel equivalent
of tying a green plastic Army man to
a bottle rocket and hoping it doesn’t blow up. The main exception in the U.S. space program is the troubled shuttle, which uses liquid hydrogen and oxygen in addition to solid fuels (see story “Space Shuttle: The Next Generation”). Soyuz rockets burn liquid oxygen and kerosene fuel.

Yet change is on the horizon. For many years, engineers have designed rockets that separate their solid fuel from liquid or gaseous oxidizers. These so-called hybrid rockets have, in principle, a huge advantage over conventional solid rockets, because a pilot can throttle the flow of oxidizer onto the fuel. What’s more, the rubber-based fuel used in hybrid rockets is nontoxic and stable, making it safer, easier
and therefore cheaper to work with.

Yet there are drawbacks. It’s difficult to ensure an even burn with hybrids, especially during start-up. More important, hybrid rockets aren’t yet powerful enough to replace solid-rocket workhorses. A hybrid rocket test flight last December produced 60,000 pounds of thrust–enough to blast a 57-foot-long rocket 44 miles above the barrier
islands of Virginia. Sounds good, but
each solid rocket booster strapped to the space shuttle pumps 3.3 million pounds of thrust. That’s 55 times more than the Virginia launch. (NASA has tested 250,000-pound-strong hybrids on the ground but has yet to launch anything close to that size.)

Improvements in the rockets are coming from an unlikely source. A Stanford researcher has devised an experimental hybrid rocket fuel based on paraffin, a substance more commonly known as candle wax. As you may have noticed, candle wax doesn’t seem to have the explosive properties necessary for spaceflight, but perhaps that’s because you haven’t been using the right match. By blowing pressurized oxygen across the surface of purified paraffin, researchers have achieved three times the burn rate
of conventional hybrid fuels. And nothing could be safer to handle or more environmentally friendly than candle wax. The researchers hope to scale up their system enough to launch a paraffin-fueled rocket in
five years. A company called Space Propulsion Group is also working
on this. Perhaps by the time NASA
devises a space shuttle replacement,
it will have also figured out how to launch it on a candle.