Back in the Comet Business

Astronomy: After a frustrating failure, astronomers prepare for an audacious comet landing. 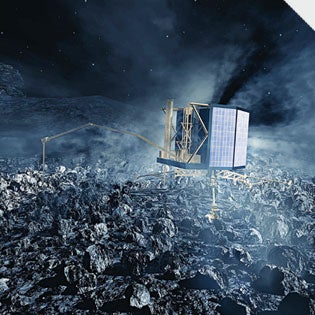 HOLD ON TIGHT
An artist´s conception of the Rosetta probe after reaching comet Wirtanen. In near zero gravity, Rosetta´s lander will harpoon the comet´s surface, then screw its legs in tight.

The most ambitious mission ever to head for a comet is counting down just in time to lift astronomers’ spirits. Comet scientists are still recovering from NASA’s disappointing Contour mission, a comet-exploring satellite that stopped transmitting to Earth less than two months after its launch in July 2002. Now, a European Space Agency mission called Rosetta will try something never before attempted: landing on a comet.

That comet is called Wirtanen, a great lump of ice, dust and rock 4,000 feet in diameter, that is hurtling through space at 84,000 mph. After launch (slated, at press time, for January 12, 2003), Rosetta will travel for some eight years, then match Wirtanen’s speed and settle into the comet’s orbit. Rosetta will first spend two years mapping Wirtanen’s surface and then deploy a lander there, firing a harpoon into the comet to anchor itself in the virtually gravity-free environment. The lander’s legs will screw themselves into the comet’s surface to secure itself for about 60 hours of experiments.

The mission will test the theory that the elements of life on Earth might have been delivered by a comet. All life is built on amino acids that orient to the left. Evidence that organic molecules on Wirtanen are structured similarly would bolster the theory. “We’re all made from comet stuff-that’s the going paradigm,” says Alan Stern of the Southwest Research Institute’s Department of Space Studies in Boulder, Colorado. “We’ll determine whether it’s right with a series of studies of comets.”

But success is by no means assured. “Since no one has ever tried to land on a comet before,” says project scientist Gerhard Schwehm, “we don’t know anything about how rough the surface is. It could be covered with fluffy snow like the Alps, or it could be rocks and craters. One thing is for sure: It won’t be like a parking lot.”