Onboard a worst-case scenario test of the world's biggest jet engine. 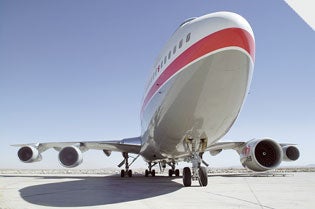 BIG MUSCLE
The GE90-115B is 3 feet wider and more than twice as powerful as the Flying Testbed´s other engines; below, computer banks keep tabs on 600 engine components.

The pilot of the Beech Bonanza 3,000 feet above us had never seen anything like it: a 747 with a bizarrely swollen engine buzzing the Mojave Desert at 300 feet. The control tower eased his fears–it’s just GE’s Flying Testbed–but aboard the jumbo jet I was a bit nervous. For 10 minutes we got no higher than 400 feet, at nearly 300 mph, powered by one engine.

No ordinary engine, mind you. GE re-placed one of the 747´s Pratt & Whitney JT9Ds with the largest and most powerful commercial aircraft engine ever built: the 115,000-pound-thrust GE90-115B. Two of these will power the longest-range jetliners yet built, Boeing´s 777-200LR and 777-300ER aircraft, up to 8,900 miles. But first things first-it needs to be put through its paces, and that was the purpose of my flight, the engine´s eleventh. Pushing the 115B to maximum thrust in heavy air and forcing it to power not just itself but every electrical system in the aircraft-as would happen during a single-engine failure-demonstrates whether the nearly 600 monitored engine and nacelle components can withstand the resulting stress and searing heat.

Aircraft engines are FAA-certified on the ground, cleared to power an airplane from New York to Los Angeles long before they´re ever pinned on a wing (though Boeing and Airbus conduct their own flight tests). Ground testing gauges everything from emissions and fuel consumption to overall performance, as well as the engines´ ability to withstand hail, water and large-bird ingestion. GE´s flight-test program is icing on the cake: â€Up here we get minus 50?F temperatures, varying weather, flight bumps-the real stuff,â€ explains Richard Ostrom, GE90 program integration manager. â€It gives us an idea of what the engine will do at altitude.â€

GE´s 747 testbed is a long-retired Pan Am jumbo, first delivered in 1970, outfitted with dozens of computer banks that track temperatures, pressures and stresses in and around the engine-up to 1,500 measurements in all. At 128 inches in diameter, the engine itself is more than 3 feet wider than the JT9D next to it. It´s also more than twice as powerful, having earned a Guinness World Record for 122,965 pounds of sustained thrust during a particularly taxing ground test. Following the â€greater airflow equals greater thrustâ€ rule, the engine features high-flow composite â€sweptâ€ fan blades that squeeze out 3,000 pounds more thrust than those of its predecessor, the GE90-94B. There´s also a nine-stage high-pressure compressor-one stage fewer than the 94B-also for increased airflow.

After we finished our low-altitude tests and climbed to cruising altitude, team leader Al Krejmas looked pleased: â€We just created the worst-case scenario for the engine. So far everything´s in the green.â€ The GE flight-test program was set to wrap up just before our press date, just in time for the engine´s first flight aboard a 777-300ER in January. And if all goes according to plan, as many as 350 passengers could find themselves on a direct flight from, say, New York to Singapore by April 2004. It´s all part of a bet that twin-engine jets will reign supreme for long-haul flights. “It’s a bit of a gamble,” says Ostrom, “but GE and Boeing believe that big twins are the future.”