A veteran airplane pilot falls in love with the weirdness of helicopter flying. 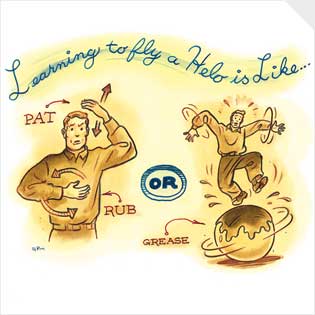 A couple of years ago, I flew a big ex-Vietnam Marine helicopter, a 1,525-horsepower, radial-engine UH-34D that in its day was the Escalade EXT of the air. In truth, I simply manipulated the controls from the co-pilot’s seat for 15 minutes once the owner of the nicely restored Dog had taken off and established us in level flight over Houston.

I promptly disestablished level flight. After a few minutes of watching me corkscrew through the Texas sky, the pilot keyed his mike and said, “If I have a heart attack, you have 40 seconds to live.”

He was right. I’d been flying a wide variety of airplanes for 30 years, but the only way I’d have gotten the porky Sikorsky onto the ground was as a lawn dart. Yet trying to fly it was the most fun I’d had in the air since I soloed a Stearman biplane. I needed more.

My friend Mario, an FAA examiner and helicopter instructor, operates three piston and two turbine helos off his broad lawn in . . . well, I won’t tell you, because Mario keeps a low profile and takes new students only if they’ve been signed off on by the Pope. Most are aerial-unit cops, state troopers, MedEvac pilots and corporate guys. And now me, terrified to be in the hands of this hardass who’s essentially seen it all.

“Flight instruction is supposed to be fun,” Mario growls as we preflight a two-seat Robinson R22 for my first lesson. “But learning to fly a helicopter is sheer torture. I can’t tell you how frustrating it is. If there were a way for me to plug you in so that I could instantly transfer what I know, I’d do it. But flying a helicopter requires repetition. Doing it over and over again until you finally memorize the right control inputs.” My first few hours of instruction will be miserable, frustrating and terminally discouraging, Mario promises me.

“A professional pilot with thousands of hours of business-jet time will come to me and beg, ‘What am I doing wrong, how can I figure out how to tame this little thing?'” Mario says. “All I can tell them is, ‘Give me more money. You haven’t done it enough yet.'”

The R22 costs $175 an hour with Mario instructing. This is getting close to twice what it costs for flying lessons in an equivalent fixed-wing Cessna. Mario’s Bell 206 JetRanger goes for $600 an hour.

The controls of an airplane are intuitive. Push to nose down, pull to nose up, turn left, turn right. You can put your feet flat on the floor, ignore an airplane’s rudder pedals and still get where you’re going. (I once numbly flew a 200-mile trip in a Beech Bonanza that I’d never flown before, with the rudder locks still in place.) Airplane controls also require gross inputs. Most lightplanes, from two-seat Cessnas to big pressurized twins, are about as touchy as a ’49 Hudson.

A helo’s controls are different. Until the movements become second nature, you have to think about what you’re doing. One clich image is that flying a helicopter is like patting your head while rubbing your tummy. Another compares it to balancing atop a greased beachball. And the controls require only pressure, not real movement. A helicopter pilot friend who is also a serious radio-control modeler swears that a Robinson trainer requires tinier control inputs than do the inch-long joysticks on his R/C controller.

Mario is a muscular little fireplug of a guy, but his movements become as sleek as a tango dancer’s as he plays air guitar with imaginary helicopter controls to show me how the aircraft responds to the merest thought transmitted through the proper pressures. “Women make better students,” he says, “because they naturally have more finesse. If you need to wear your wife’s underwear to get in touch with your feminine side, do it.”

There’s a stick called a collective in your left hand. It goes up and down like a sports car’s parking brake and has a motorcycle-grip twist throttle on the end. In the era of that old UH-34D I’d mistreated, you turned the grip left to add power, right to remove it. Today, you do that only to warm up the engine and run a magneto check. Even on my tiny R22 trainer, the engine rpms are managed automatically and power is actually added by pulling up on the collective, which coarsens the pitch of the main rotor blades and forces the engine to put out more power.

In your right hand, you’re holding another stick called the cyclic. Say SIGH-click. (And while we’re at it, don’t ever say chopper or copter. The only people who do are TV blow-dry weather types and other amateurs. If four syllables are a burden, call it a HEE-low.) With the cyclic, you control the helicopter’s bank, the up-or-down angle of its fuselage, and generally your track over the ground.

Ignore a helo’s anti-torque pedals at your peril. Ignore them, in fact, and you’ll find yourself a passenger on a giant flying pinwheel. They control the small propeller–or in some cases a ducted fan or blower–at the tail of the bird. If it weren’t there, a helicopter’s fuselage would rotate in one direction around the main rotor shaft about as fast as the rotor blades were turning in the opposite direction. Particularly while trying to hover, the pedals are crucial.

Bomber pilots call it CEP–Circular Error Probable, the circle around a target within which 50 percent of their bombs are statistically expected to land. That idea is also useful in determining the amount of real estate a novice helo driver will cover while attempting to hover over a spot. My CEP during that first lesson was half an acre of the onion fields and sod farms over which we practiced, to the bemusement of at least one tractor driver who obviously had no idea that my CEP happened to include him.

The tractor guy was gone during my next session with Mario over the same fields, but he’d have been impressed. This time, I actually hovered. Not for long, mind you, but for those few pure, perfect, I’m-a-hummingbird moments when the little Robinson rested calmly in the air 3 feet above the vegetables, I was in control of the most marvelous flying machine the world has ever seen. Thank you, Igor Sikorsky.

But one question, Igor: How did you learn to hover on your first helicopter flight without Mario to say calmly, “Left pedal, more left pedal, watch your attitude, add some power, left cyclic, keep the nose up, left some more . . . I’ve got it.” How the hell did you manage to do that, Igor?