The James Webb Space Telescope is slated to launch in 2010. 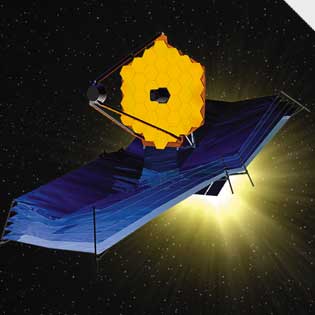 FARAWAY EYE
The James Webb Space Telescope is slated to launch in 2010.

NASA is searching for the first sunrise–that long-ago time when the first generation of stars ignited, flaring into life out of the uniform drabness that followed the Big Bang. The James Webb Space Telescope (named for the man who headed NASA in the 1960s) boasts a collapsible 20-foot mirror that will gather infrared light, unlike its predecessor the Hubble, which collected visible light. This will make the Webb far more able to catch rays from the universe’s earliest stars.

But getting such a large mirror into space is neither easy nor cheap. To keep costs down, the mirror (twice the size of Hubble’s) must be built of a lightweight, as-yet-undetermined material, and be able to fit into a small rocket. This poses what NASA project scientist John Mather calls the “telescope in a bottle” problem. Engineers plan to create a segmented mirror that unfolds in orbit. But its 36 segments will be flimsy, which means the materials can’t be relied on to keep the mirror in perfect optical shape. The solution? Mechanical devices that minutely adjust each plate.

Another problem: Infrared telescopes need to be kept cold. Otherwise the ambient heat of the telescope and its surroundings interferes with measurements. To get the instrument away from our temperate planet, NASA plans to drag the Webb three months into space and dump it some 940,000 miles from Earth-four times farther than the moon. Perched in a mostly stable gravitational sweet spot in a direct line from the sun through the Earth, the telescope’s outward gaze into deep space will never be obstructed by our planet or its atmosphere. A shield the size of a tennis court will protect the instrument from the sun and Earth, keeping it a crisp and cool minus 370