Formula 1 cars are the most technologically advanced racecars on the planet. There's a reason why most American racing fans don't much care. 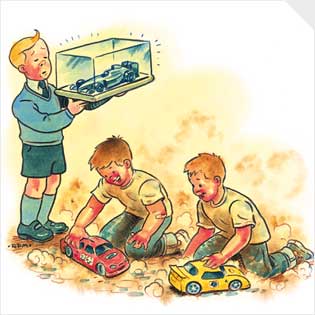 The momentary fascination is the sound of V10 piston engines turning at turbine speeds. At 18,000 rpm-yes, 18,000 rpm-the titanium connecting rods actually stretch enough that the slight elasticity has to be taken into account lest the demitasse-size pistons smite the heads. That’s an explosion of fuel in each combustion chamber 150 times every second. When you have listened just once to a full field of such engines winding up for the green light, you’re probably two years closer to needing a hearing aid. What you hear on the Speed Channel’s TV broadcasts of F1 races is a wimpy whisper of actuality.

In the time it takes a good sports car to accelerate from zero to 60, an F1 car will be doing 150-on its way to 220-mph road-course straightaway speeds. The top F1 teams develop their cars in rolling-road wind tunnels, and the downforce their aerodynamics generate is so enormous-up to 5,000 pounds-that the cars could easily race upside down on an inverted track, if the corners weren’t too slow. Even more impressive than its 2G acceleration force is an F1 car’s braking force, which can reach a near-incomprehensible 4Gs. If a 170-pound driver’s six-point harness were for some reason to fail under braking, he’d be slammed against the steering wheel with a force of more than half a ton.

Yet what a bore. It’s a culture thing. Americans demand more drama. We want a 45-to-42 seesaw Super Bowl; Euros are happy with a 1-zip World Cup game after an hour and a half of footie. F1 fans feel that the best car on the track should win the pole position, should therefore be first through the first turn, never be passed, and finish first. And if the tens of thousands of screaming, flag-waving, airhorn-farting Europeans at the track in the northern Italian city of Imola might have wished for a bit more action-there were just two passes of consequence during the entire race, one of them in the first few hundred yards of the first lap-for them the outcome of what was essentially a high-speed parade was still satisfying. The two hugely powerful home-team Ferraris were one-two in the same order in which they’d started, the Williams BMWs on slightly less effective tires were three-four ditto, and everybody else was a supporting player.

The drivers who pilot these 3.0-liter 800-hp 1,320-pound rolling missiles are an elite (Michael Shumacher makes about $32 million a year as the lead Ferrari driver) but sullen lot, giving away autographs as freely as they do thousand-Euro bills. Most make Russell Crowe look as giddy as Pee-wee Herman. For Americans, the drivers come first. “Ricky Rudd’s my man,” a Winston Cup fan will say. Or Mark, or Rusty, or Jeff. Whether they’re driving a Dodge, Ford, Chevy, or Pontiac is important, but we like to think that American racing is athlete versus athlete, not a battle of countries and corporations. Before each Winston Cup race, the drivers are paraded around the track, each in his own signboarded convertible alongside his own local beauty queen. At an F1 race, the drivers are crammed onto a single flatbed.

Much English, German, and Italian national pride is at stake in F1, which is amusing, considering that most of the cars, including Mercedes and Renault, are made in England, and Toyota’s new car and engine are both made in Germany. What you really see at play is the enduring power of class. Grand Prix racing reflects Europe’s near-universal class condescension. Polo seems positively y’all-come-on-down by comparison. The commoners sit on bleachers, and the pits and paddock are for the lords and ladies. My temporary Paddock Club “membership” at Imola cost my hosts nearly $4,000, I learned, but even with four grand, you couldn’t buy your way in. Unlike Winston Cup’s buy-’em-at-the-gate paddock passes, you’d have to be invited by a team or sponsor.

At an F1 race, celebrity-sniffers congregate around the impenetrable, electronically controlled Paddock Club turnstiles, hoping for a glimpse of a driver returning from a brief, painful PR appearance in a sponsor’s hospitality suite, for that’s the only way they’ll ever see one up close. As I came out of the Club on the afternoon of qualifying, a group of Italians pointed at me, clapped hands to mouths, and jabbered excitedly. Somewhere, apparently, a white-haired ancien from the days of skinny-tired, front-engine Grand Prix cars also wears Harry Potter glasses and a goofy-looking Tilley sun hat. Knowing F1’s rules, however, they didn’t ask me for autographs.