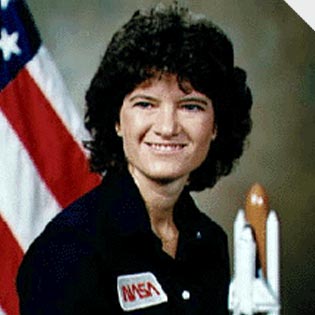 by Photograph of Sally Ride courtesy of NASA

Hawks in the the Pentagon and other government agencies may have been elated when the Bush administration announced its plans to gear up for armed conflict in space, but former astronaut Sally Ride had a different reaction. She called the plans “disastrous,” because destroying enemy satellites and other objects in space means creating more space debris.

“As soon as you start increasing the amount of junk in a low-Earth orbit, you have an unintended by-product that starts putting some of your own quite valuable satellites at possible risk,” Ride said during a speech in April. In 1983, when Ride, the first woman to travel to space, was aboard the Challenger space shuttle, it was hit by a piece of space junk. The culprit, a fleck of paint, chipped the shuttle’s window.

Earth’s orbit is already littered with bits of debris, which have been accumulating since space exploration began. Space junk can reach relative velocities of 30,000 mph-speeds at which it can cause serious damage. U.S. Space Command tracks and catalogs debris that’s larger than 10 square centimeters-of which there are roughly 8,900 individual pieces. Debris bigger than 1 square centimeter can destroy a space shuttle or a satellite, which means NASA can only cross its fingers. The agency replaces, on average, one shuttle window per flight because of collisions with small bits of space debris, and some argue that it’s only a matter of time before something larger causes a serious problem. Indeed, in 1996 the French satellite CERISE was knocked off its orbit in 1996 when a chunk of an old rocket smashed into its stabilization boom. CERISE was able to return to orbit, but other craft may not be so fortunate.

NASA officials have set international guidelines for what it calls “users of the orbital environment” (see orbitaldebris.jsc.nasa.gov). One major target are the rockets used to launch satellites, which continue to orbit after separating from their load. In the past such rockets often contained residual fuel and, after years of exposure to solar radiation, the bulkheads had a tendency to rupture and explode, spewing countless debris particles into orbit. NASA is now requesting all users of space to make sure their rockets are completely drained of fuel and suggests that all objects be placed in orbits that eventually expire. Discarded rockets can be aimed so that they fall out of orbit and burn up in the atmosphere, and satellites can be brought out of orbit when they are no longer useful. Some satellites orbit too high for reentry in what are called “geo orbits.” NASA calls for those satellites to be sent higher, where they will be out of the way-into a kind of “space landfill.”

Despite NASA’s concerns about the proliferation of space junk, the agency isn’t likely to oppose U.S. testing of weapons that could be used in space. “No one wants to go to war,” says Gene Stansbery of NASA’s Johnson Space Center, “but on the other hand, we don’t want to lose the country just because we’re afraid of creating debris.” According to Stansbery, given the current rate at which debris enters space, it would take 100 years for Earth’s orbit to become useless because of litter. And Stansbery is sure that NASA will find a way to all but eliminate the proliferation of space debris before then. “You don’t expect us to still be operating the same way 100 years from now?” he says rhetorically.

Others insist the concerns about space junk are overblown. “The folks making the debris argument are just making a lot of noise-it’s just meaningless and senseless,” says Barry Venible, a spokesman for the North American Aerospace Defense Command and U.S. Space Command. Current national space policy, he says, “specifically prohibits the development, acquisition, and deployment of space force application systems.”

That policy doesn’t prohibit the military from testing such weapons, however, should circumstances force a shift in U.S. space policy. “We get paid to think about how we’re going to win the next war,” says Venible. “That’s what we’re doing with space systems.”