Space travel: And you thought windsurfing was a rush. 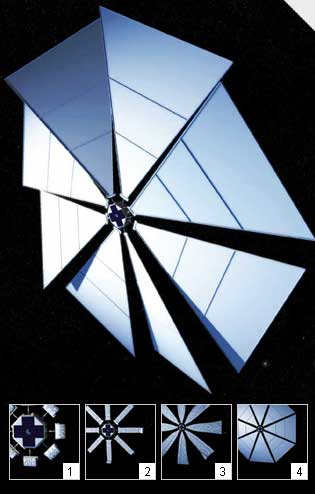 UNFURLING A SPACECRAFT
When Cosmos 1 reaches Earth orbit, mission control will open its giant solar sail. The spacecraft deploys eight arms (1), each of which holds a rolled-up sail panel. Compressed gas flows into tubes in the sails, unfurling (2) and expanding (3) the thin sheets of Mylar to create a rigid fan (4).

Ever since space travel began, there has been exactly one way to reach the heavens: rocket engines. But now an entirely new approach is set to launch-a strategy that fights the unyielding pull of gravity with the gentle push of sunlight. The anticipated December blastoff of the Cosmos 1 spacecraft from a Russian submarine will debut the age of solar sailing.

Solar sail spacecraft may one day surpass rocket-propelled flight, especially for long journeys, by drawing on a nearly limitless propellant: sunlight. Light is made up of tiny packets of energy called photons, which may be thought of as both waves and particles. Solar sails reflect these photons and push them back. Since each action has an equal opposite reaction, each time a photon is reflected, it in turn pushes back on the spacecraft, slowly accelerating it out into the galaxy.

The Cosmos 1 mission is funded by The Planetary Society, a space exploration advocacy group, and Cosmos Studios, a media company headed by Ann Druyan, widow of astronomer Carl Sagan. The mission’s goal is to demonstrate that sunlight can affect a spacecraft’s trajectory. Success will be measured not in miles traveled, but by how much the sun alters the spacecraft’s course.

Another mission, one that uses a solar sail to get somewhere, may not be far behind. A company called Team Encounter, of Houston, Texas, is building what it calls Humanity’s First Starship, a solar sail the size of a football field. After launch in 2005, the spacecraft’s sails will slowly push it through the solar system and into interstellar space. The private mission is raising money by selling Space Travel Kits-basically sheets of paper on which you can write greetings, attach photos, or even include DNA samples, which will be miniaturized on optical disks and attached to the spacecraft. Should the spacecraft be discovered by a distant civilization, your personalized message might help represent the entire human race. Team Encounter hopes to sell at least 1 million Travel Kits for around $50 apiece; at last count, they had about 930,000 left to sell.

And therein lies the problem: Solar sail technology is unlikely to thrive on private funding and, so far, public agencies have been cautious. NASA is interested in the technology but hasn’t yet signed on to a project. The National Oceanic and Atmospheric Administration is looking into using solar sails to suspend its weather and climate satellites above Earth’s poles, giving them continuous coverage of the planet. Many scientists at the European Space Agency (ESA) were excited about the possibility of using solar sails for an upcoming mission to Mercury, whose proximity to the sun gives the sails a much higher available thrust. But that mission will instead use solar-electric thrusters. “Space is a risk-averse business,” says Colin McInnes, professor of aerospace engineering at the University of Glasgow. “But if Team Encounter succeeds in getting the spacecraft out of the solar system, that will give a huge boost to solar sailing.”