In 2006, NASA will send the Dawn spacecraft up to orbit the two largest asteroids in the belt between Mars and Jupiter. 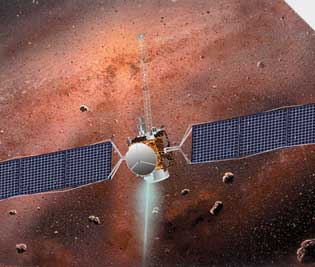 Ingredients for a solar system: take gas and space dust, stir until clumpy, let cool for a few billion years. Scientists believe the nine planets formed this way, and the asteroid belt between Mars and Jupiter is the remaining bits that weren’t fully cooked. NASA will check it out in 2006, when it sends the Dawn spacecraft up to orbit the belt’s two largest asteroids, or “minor planets”: Ceres, which may have water beneath its surface, and the volcanic Vesta.