NASA has had its share of ups and downs over the years. 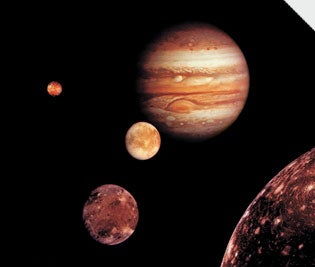 Marvels and Missteps: Voyager 1 photographed Jupiter and its planet-size moons in 1979.

1962 John Glenn becomes the first American to orbit Earth. Mariner 1, America’s first
attempt at an interplanetary spacecraft, ends up at the bottom of the Atlantic Ocean.

1965 Mariner 4 flies past Mars, sending back the first images of the Red Planet’s surface.

1976 Viking 1 sends back the first close-up images of Mars.

1977 The twin Voyager spacecraft begin their grand tour of the outer planets.

1990 Hubble Space Telescope is launched with a faulty mirror.

1998 The first component of the international space station is launched. Glenn returns to space on the STS-95 shuttle.

2000 The first crew of three takes up residence in the international space station.