Aviation Design: A new idea for taking on the jets. 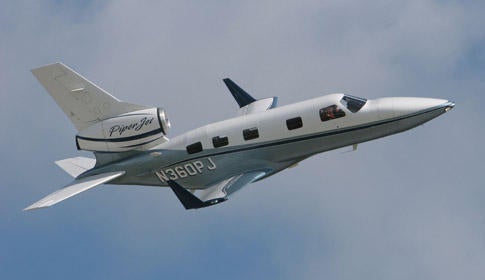 The term "very light jet" (VLJ) refers to an emerging category of small jet-powered aircraft that deliver the speed and sophistication of a private jet in a less-expensive craft that requires less training to fly. In tests this year, the most capable VLJ so far, the PiperJet, reached its flight ceiling of 35,000 feet, the same relatively turbulence-free altitude that commercial airliners use. With a planned 414mph cruising speed and a 1,300-nautical-mile range, the $2-million PiperJet can fly from New York to St. Louis in less than 2.5 hours without refueling. See more images of the PiperJet at the Best of What's New 2009 site.
SHARE

PROPELLER WITH PUNCH
Renaissance Research claims its Dart Racer might someday give the Lear Jet a run for its money.

The corporate jet has long been the ultimate status symbol, but Renaissance Research is out to challenge jet-powered primacy. The California-based company is bent on designing the fastest propeller plane in history and, ultimately, on producing an alternative to today’s midsize jets.

The first step, says company President Sam Bousfield, is to build a racing plane using a state-of-the-art piston engine, similar to the one in your car only bigger. Piston engines were abandoned in large planes shortly after World War II. Today’s commercial planes have either jet or turboprop engines — technologies based on turbines that generate plenty of power but also guzzle gas. With fuel prices expected to rise, Bousfield sees great potential for the Renaissance design, which he estimates will require one-third the gas of its jet-engine competitors — and fly just as fast.

The heart of the plane is a 1,000-cubic-inch V12 engine featuring electronic fuel injection and a system that monitors engine performance and efficiency. The engine will sit in the middle of the plane and power a propeller in the rear — increasing the plane’s stability — and the front and rear fuselage have been shaped accordingly. The racing plane is slated for competition in 2003. If it lives up to expectations, Renaissance plans to develop a commercial plane for up to 19 passengers, featuring twin engines powering a single propeller.Should one engine fail, the plane could continue its journey unaffected, thereby ensuring greater safety on long-distance flights. According to Bousfield, such a plane could fly nonstop from Paris to Chicago at speeds of Mach 0.8 to 0.82 — comparable with all but the fastest commercial jets.