Spacecraft headed to Mars or beyond may harness a new source of propulsion that could refuel almost anywhere in the... 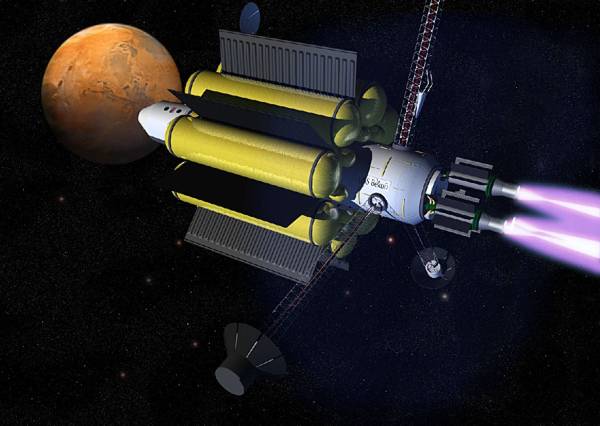 Spacecraft headed to Mars or beyond may harness a new source of propulsion that could refuel almost anywhere in the solar system. Last week, the VASIMR prototype plasma rocket achieved 200 kilowatts of power, the milestone the team was striving for. Now they are beginning development of a flight-capable version, slated for launch in 2013.

Rockets since the dawn of the space age have relied on burning solid or liquid chemical propellants very quickly to reach high velocities. By contrast, the plasma rocket uses an electric power source to ionize hydrogen or helium into superheated plasma, and then directs the plasma with magnetic fields in the proper direction to create thrust.

Such a design has side benefits in addition to more efficient propulsion. A spacecraft powered by a plasma rocket could make pit stops on Mars or elsewhere to pick up more hydrogen, because the latter represents a plentiful presence in the solar system. The hydrogen could also double as a radiation shield for human crews on long-duration missions.

The latest plasma rocket represents the vision of Franklin Chang-Diaz, a former NASA astronaut and founder of the space company Ad Astra. His Variable Specific Impulse Magnetoplasma Rocket (VASIMR) is slated for launch to the International Space Station three years from now, where it can undergo additional testing and even help boost the space station, to maintain its orbit.

Chang-Diaz told Technology Review that discussions have already begun with SpaceX and Orbital Sciences about possible launch on one of their vehicles. An actual spacecraft mission that uses the plasma rocket would require a long-term electric power source as well — Chang-Diaz is leaning toward nuclear.

If all goes well and the plasma rocket gets off the ground, it may prove flight-worthy even before future NASA missions to Mars or beyond become a reality.