In a recent test at the White Sands Missile Range, a specially equipped C-130 plane fried a parked truck with... 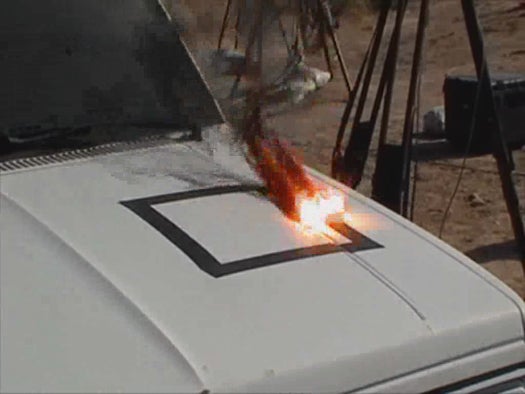 In a recent test at the White Sands Missile Range, a specially equipped C-130 plane fried a parked truck with a powerful laser. And while we still haven’t seen evidence of the laser “defeating” a ground target, as Boeing puts it, a video of it scorching a direct hit on the hood of a truck is still pretty amazing.

As you can see, the laser beam burns right through the truck’s hood, and then through the engine, “defeating” the vehicle. Called the “Advanced Tactical Laser” (ATL), this is the first time the megawatt-powered chemical laser has been used to engage a target in a combat simulation situation.

Now, to be fair, the car was parked by itself in the middle of the desert. So unless we’ve got a clean shot at Al-Qaeda’s parking lot, the beam isn’t ready for prime time. Plus, last year the Air Force Scientific Advisory Board said that “the Advanced Tactical Laser testbed has no operational utility.”

Despite those reservations, Boeing is still confident that the laser will soon provide a weapon that can take out a target with little or no collateral damage.