Stanford students send a tiny self-piloted aircraft up beyond 7,000 feet 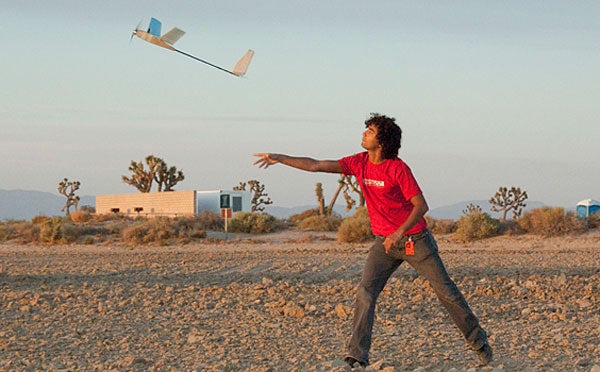 A class project ended in an unofficial world altitude record for Stanford students and their small, self-piloted aircraft.

The students flew their electric-powered airplanes from a dry lakebed at NASA’s Dryden Flight Research Center at Edwards Air Force Base on the morning of September 11. One flight reached an estimated altitude of 7,142 feet, and set the new mark for autonomous aircraft in the 5-kilograms-or-less weight class.

Each propeller-driven plane cost just $500 for an electronics package crammed into a balsa-wood and foam plane. The Stanford group of aeronautics and astronautics students envisions such tiny planes becoming accessible tools for everyone ranging from farmers to firefighters.

“You can build 500 $2,000 airplanes for $1 million,” said Brendan Tracey, a second-year masters student. “These sort of surveillance vehicles could really help do more research more cheaply and we could start finding out a lot more about the world in which we live.”

Other low-budget student efforts have produced similarly impressive results. PopSci previously pointed to a group of MIT students who built a balloon to snap pictures at the edge of space for a mere $150.

The Stanford students’ successful flight took place in between several harrowing attempts. A first test with a plane named Cero Suave dived nose-first into the road, but the second test with Blue Panther climbed to the height of the unofficial new record. The plane landed automatically after losing contact with the pair of laptops that served as ground-control station.

Blue Panther made two more attempts to go even higher. The third try came within meters of the second flight, but had to abort when a breeze nudged the aircraft too close to the airspace allotted to the students at Edwards Air Force Base. A fourth attempt actually reached 8,169 feet before drifting out of the airspace and going into automatic crash mode as a safety precaution — thereby disqualifying itself.

The National Aeronautic Association and the Federacion Aeronatique Internationale must certify the record-setting flight before it becomes officially recognized in the United States and the world. But the students received an initial treat when they later went to watch the space shuttle Discovery land.