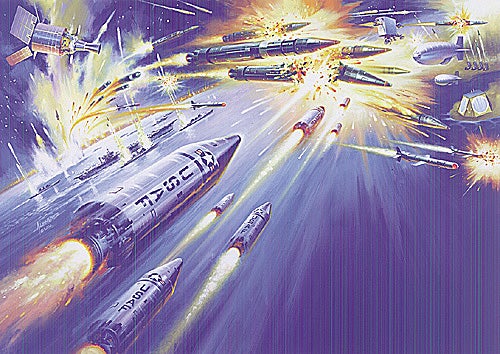 Can humans keep robots from fighting in space?.
SHARE

A newly formed International Committee on Robot Arms Control (ICRAC) has asked nations to ban military bots from space and prevent robots from toting nuclear weapons. No doubt, human characters from science fiction stories such as “Battlestar Galactica” and “Terminator” might agree.

The group so far consists of: Noel Sharkey, a robotics expert at the University of Sheffield, UK; Jurgen Altmann, a physicist at Dortmund University of Technology, Germany; Robert Sparrow of the Centre for Human Bioethics at Monash University, Australia; and Peter Asaro, a philosopher at Rutgers University in New Jersey.

The experts hope to recruit more people to help monitor the ongoing arming of robots, but they might have their work cut out for them. Thousands of drones and unmanned vehicles already operate in Iraq, Afghanistan and Pakistan.

Other concerns of the group include the temptation for robot-armed nations to go to war without casualties, and the danger of autonomous military bots kicking off conflicts on their own. Some researchers have independently begun developing a code of ethics that could be programmed into fighting robots.

Some robots have already achieved a shoot-first-and-ask-questions-later state of being. Anti-missile systems used by the U.S. Army and Navy already have a full-automatic mode to track and shoot down incoming projectiles. Robot gun posts along the Israeli and South Korean borders may also take the initiative to fire on human intruders in the very near future.

Without trying to rain on this parade, we here at PopSci wonder if the effort doesn’t come a bit late. The U.S. Army has already begun hosting robotics rodeos, the Air Force has trained up hundreds of new drone pilots, and the Navy has plans for its own fleet of submarine drones.

At least much of the military still remains leery of turning robots loose on the battlefield in full auto mode. The Air Force certainly made its feelings clear on rogue drones when it sent a manned fighter jet to eliminate a malfunctioning Reaper that escaped control of its human handlers.