NASA Shoots Laser From Maryland to Hit the LRO Spacecraft, 250,000 Miles Away

Fancy yourself a sharpshooter at laser tag? The team at Goddard Space Flight Center might just have you beat. After... 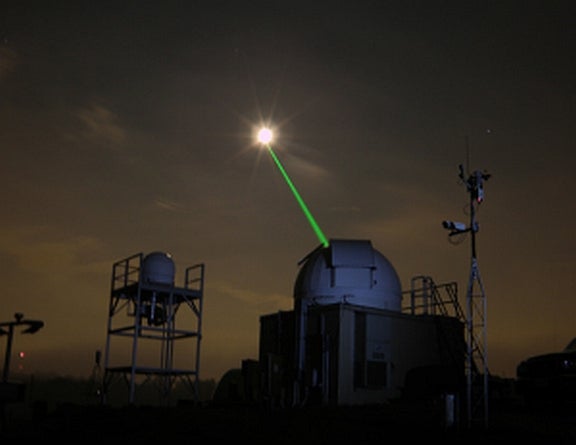 NASA Goddard’s Laser Ranging Facility hits the LRO in stride 28 times per second across a quarter million miles of space.

Fancy yourself a sharpshooter at laser tag? The team at Goddard Space Flight Center might just have you beat. After all, since launching the Lunar Reconnaissance Orbiter, they’ve been firing a laser across 250,000 miles of space, hitting the minivan-sized LRO as it orbits the moon at nearly 3,600 miles per hour. It’s no lucky shot either; they do it 28 times per second.

But perhaps even more impressive is the accuracy of the information the laser gathers. The Goddard laser is the first laser ranging effort to extend beyond low earth orbit, and it is able to measure the range of the LRO to within four inches. The microwave stations that are also tracking the LRO, by comparison, have a margin of error of about 65 feet. The accuracy provided by the lasers in turn allows researchers to know exactly where the LRO is in space, a critical component for creating accurate maps of the moon’s surface.

The fundamentals behind the laser ranging are actually quite simple. A telescope on the ground at Goddard fires one-way laser pulses across space to the LRO. When the laser gets there, the LRO makes a record of each contact and sends it back to earth via its radio telemetry link. After that, good old-fashioned arithmetic is used to calculate the distance to LRO based on how long it takes the pulse to reach it.

But connecting with the LRO presents myriad challenges. Much as a quarterback must lead a wide receiver to connect with him in stride, the telescope must fire the laser in front of the orbiting LRO. But its timing must be much more precise than a quarterback’s; because the laser receiver on the LRO is doing double-duty tracking both the Goddard signals and those from its own two-way range-finding laser aimed at the moon’s surface, the pulses must be timed so the two lasers don’t interfere with one another. One NASA geophysicist likens it to shooting at a spinning coin from a mile out and repeatedly hitting it on the edge.

The Goddard team does have a little bit of leeway though. After traveling a quarter million miles through space, the laser spot is 12 miles wide when it reaches the LRO, giving those on the ground some room for error. But given the range, and the LRO’s 3,600 mph speed, let’s just say that what Goddard is doing every day puts your laser tag exploits in perspective.