Moon May Beat Pluto as Coldest Place in Solar System 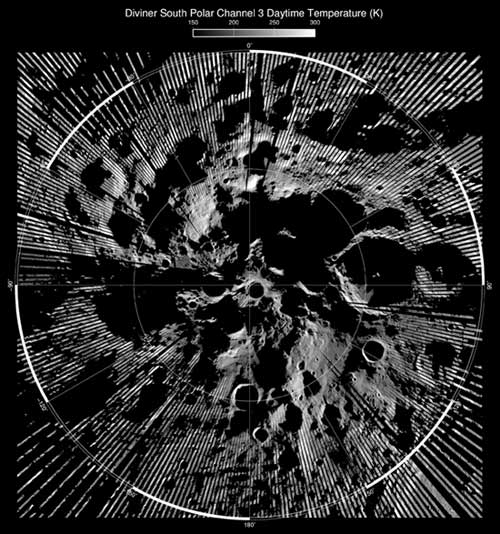 Robert Heinlein got it right when he dubbed Earth’s moon a harsh mistress. NASA’s lunar orbiter examined some craters near the lunar south pole that never see sunlight, and may actually represent the coldest places in the solar system — not to mention reservoirs of precious water ice.

The Lunar Reconnaissance Orbiter (LRO) has conducted an ongoing survey of temperatures on the moon’s surface through its Diviner Lunar Radiometer Experiment. The temperatures in the craters can dip as low as -397 degrees F, the lowest temperatures recorded anywhere in the solar system.

Such freezing temperatures even beat those measured on icy loner Pluto in the outer solar system, but that doesn’t surprise scientists. The temperature differences depend on the lack of sunlight ever reaching certain craters on the moon, rather than distance from the sun.

In fact, one scientist said that the closest planet to the sun, Mercury, may harbor the coldest regions in the solar system.

LRO’s latest science upload has also revealed the possible presence of water ice near the moon’s shadowed regions. A neutron detector aboard the lunar orbiter found a decrease in neutron radiation that could represent either water or hydrogen in certain areas.

The results should also boost NASA’s hopes for the upcoming LCROSS mission to find more solid evidence of water ice. Two separate impactors are on schedule to slam into craters at the moon’s south poles next month, and kick up any signs of water ice in the cloud of debris. Earthlings, ready your straws.