The Big Question: How do we find life outside Earth? 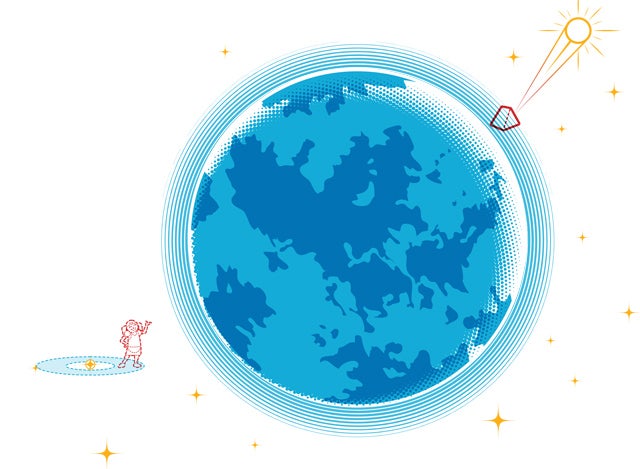 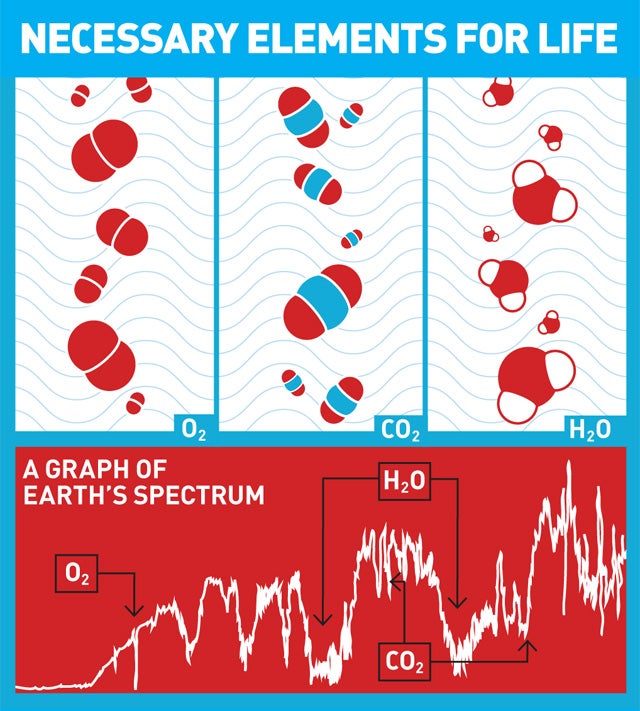 How to Find Life

When starlight passes through a planet’s atmosphere, certain elements absorb specific wavelengths of light, and these show up as dips in the spectrum.

If aliens are out there, the best shot at finding them—assuming they resemble the life-forms on Earth—is to look for planets like ours. E.T.’s home will probably require an atmosphere to have liquid water and keep out solar radiation, so astronomers search for perfectly sized and situated planets surrounded by blankets of life-supporting gases like oxygen and water vapor. Now they know how to recognize that ideal atmosphere. A team led by Enric Palle of the Instituto de Astrofísica de Canarias in Spain recently measured the diffraction patterns of chemicals in Earth’s atmosphere caused by sunlight passing through it. They found that signs of life like oxygen are much easier to read in the resulting graph [right] than they had anticipated, so the same technique could help in our search for planets with ets that look like Earth and sampled their atmospheres,” Pallez says, “but if there’s life out there, we’ll have found it.”

Three Signs that a Planet can Support Life

1. It’s in the Zone
Life that depends on water can survive only in a narrow band of distance from a star: Too close, and the water evaporates; too far, and it freezes. The best place to look for habitable planets is in this “Goldilocks zone,” a roughly 74-million-mile-wide area generally defined as no closer to a star than Venus is to our sun and no farther away than Mars. Three and a half billion years ago, Mars had an atmosphere that kept it at about the same temperature as Earth, but with little atmosphere left to trap heat, now it’s a brisk –81°F. Venus, at 847°, sits just outside the edge of tolerable heat. For stars larger or smaller than the sun, scientists adjust the width and distance of the sweet spot accordingly.

Transiting Planet: One method of detecting exoplanets is to look for dips in the brightness of stars that occur when a planet passes — or “transits” — between a star and our line of sight. Scientists can determine the size of a planet by comparing the ratio of the starlight before and during the transit.

NASA is developing concepts for two land-based telescopes, one for visible light and one for infrared, together known as the Terrestrial Planet Finder. It will measure the size, location and temperature of exoplanets and their atmospheres with more accuracy than ever before. Further out is a vision for the Life Finder mission, space-based telescopes that will scan promising Earth-like exoplanets for details like seasonal variations in the levels of atmospheric gases.

2. It’s the Right Size
The mass and diameter of a planet tells scientists whether it is solid like Earth or gassy, and therefore too hot to sustain life dependent on water. The larger a planet’s mass and the closer it orbits its star, the more its gravity will pull at its parent star and cause the star to wobble on its axis. Less wobble indicates a low-mass planet, suggesting that the planet could be rocky. Meanwhile, as planets pass in front of their stars, the starlight momentarily appears less bright. Scientists have already found big planets the size of Jupiter and Saturn outside our solar system through these methods, but most are large balls of gas harboring no chance of life.

3. It Carries the Right Chemicals
If astronomers spot oxygen, carbon dioxide and water, they’ll pop open the champagne. Oxygen is normally so reactive that it eventually combines with other elements. If there’s enough of it to show up solo in researchers’ analysis of an atmosphere, there’s probably photosynthetic life that’s constantly replenishing the supply. That life needs carbon dioxide for fuel.

Finding methane could mean that there are anaerobic forms of life, like some bacteria here on Earth that chug along without need for oxygen and make methane as a waste product. As with oxygen, methane doesn’t last long on its own unless it’s constantly replenished.

Q. What’s the big deal about water?
A. Life as we know it cannot exist without water; it’s in all of our cells. Scientists are focusing on water-dependent organisms for now, because life based on anything else, like silicon or ammonia, is purely speculative.

Q. Can the atmosphere tell us if there’s intelligent life?
A. No. Despite all the carbon dioxide we exhale, animals (nevermind humans alone) don’t affect the atmosphere enough compared with the activity of unthinking photosynthetic life.

Q. What will alien life look like?
A. However anticlimactic, Earth’s history suggests that our first detections of life will look like bacteria rather than little green men. Complex life has populated Earth for 500,000 years, but bacteria have been here for 3.5 billion years.

Q. What if we find signs of life in a distant atmosphere?
A. “We probably wouldn’t send a probe,” says Wesley Traub, the chief scientist of NASA’s Exoplanet Exploration Program, “because the travel time would be hundreds or thousands of years.” Sending a radio signal would take only 30 years, and then another 30 for “them” to reply. Or we could use a laser essentially like a big flashlight that says, “Hey, we’re here.”