It’s been a busy day for India’s space agency. Underscoring the world’s largest democracy’s desire to become a serious player... 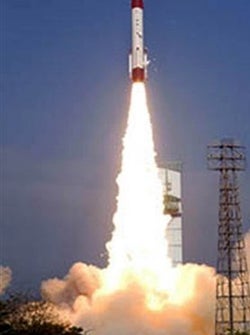 It’s been a busy day for India’s space agency. Underscoring the world’s largest democracy’s desire to become a serious player in the space business, the Indian Space Research Organisation launched seven satellites today, six of which belong to foreign nations.

India’s satellite, Oceansat-2, will enhance the ocean monitoring capabilities of the original Oceansat, which launched in 1999. Four of the other six satellites were German, while one was Turkish and one Swedish. Each of those carries a university-funded payload designed to conduct research on various new technologies.

The satellites were put into orbit about 447 miles above Earth’s surface at a cost of $40 million dollars; the rocket alone cost India 700 million rupees, or nearly $15 million USD. India has pursued a space program since 1963, though its first ever moon mission was aborted last month after the space agency lost contact with a probe that was successfully placed on the moon’s surface last year.

However, as far as launching satellites is concerned, India is in the money. It first fired an Italian satellite into orbit in 2007, and due to its cost advantage over other space-faring nations, it has since carved out a role for itself as a reliable, economical alternative to more expensive carriers (like the U.S.). And if you think six in one go is impressive, last year they launched 10 with a single rocket. Given how crowded the skies already are–and how much more crowded they are expected to become–India could easily become the satellite ferry to the world.