The World’s First Image of an Entire Sunspot’s Structure

The first computer-generated model of an entire sunspot—a magnetic anomaly on the surface of the sun—tracks the magnetic fields in... 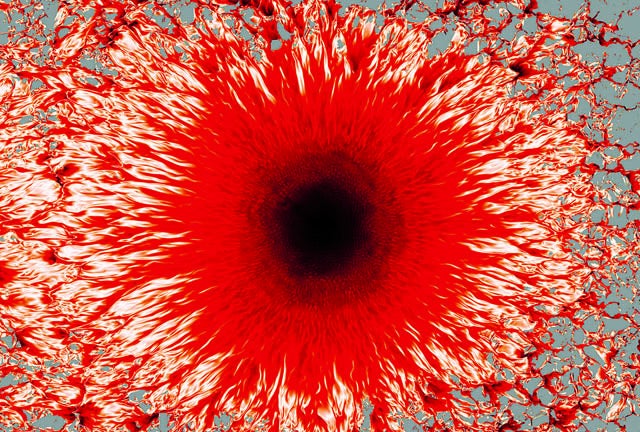 The interface between a sunspot’s central and outer regions shows a complex structure.

The first computer-generated model of an entire sunspot—a magnetic anomaly on the surface of the sun—tracks the magnetic fields in the area, helping researchers figure out how the sun releases energy around the spots. At the dark center, or umbra, the field is so strong—about 1,000 times the solar average—that it blocks the solar gases that typically bubble to the surface.

At the edges, weaker magnetic forces pull filaments of plasma [colored red] outward at up to 60,000 mph. This model was made possible by the new IBM supercomputer at the National Center for Atmospheric Research in Boulder, Colorado, which can crunch 76 trillion calculations per second. Scientists fed it images of the sun’s magnetic field captured by telescopes, along with a battery of physics formulas. With the results, the team created the first view of the activity of a hypothetical 1.9 billion-square-mile, 3,700-mile-deep sunspot. “Ultimately what we really want to understand is how a star like the sun produces a magnetic field,” says Matthias Rempel, the lead researcher on the project. “The sun is the key to understanding this because it’s the only star [close enough that] we can observe the details of this process.”