The next-generation surveillance package for the Air Force's MQ-9 Reaper drones, named for Medusa's stony glare, will provide an unprecedentedly broad view of the battlefield spanning time and space

The military’s unblinking eye in the sky, which keeps watch over operations in Iraq, Afghanistan and Pakistan, is about to get even beadier. A new multi-camera sensor the U.S. Air Force is adding to its killer spy drones will exponentially broaden the area troops can monitor, and the technology lets a dozen users simultaneously grab different slices of the image. Called the Gorgon Stare, it represents the next big step in unmanned combat aircraft.

Two MQ-9 Reapers retrofitted with the new $15 million wide-area aerial surveillance sensors, or WAAS, will fly test missions later this year, and the Air Force plans to have ten such planes in battle by next spring, in rotation on a 24/7 patrol. “It’s an incredible force enhancer,” said Colonel Eric Mathewson, Director of the service’s Unmanned Aircraft Systems Task Force at the Pentagon. Sierra Nevada Corporation, makers of the WAAS, chose the name, a spooky reference to the cursed sisters from Greek mythology—Medusa being the Beyoncé of the trio—whose gaze turned men to stone. 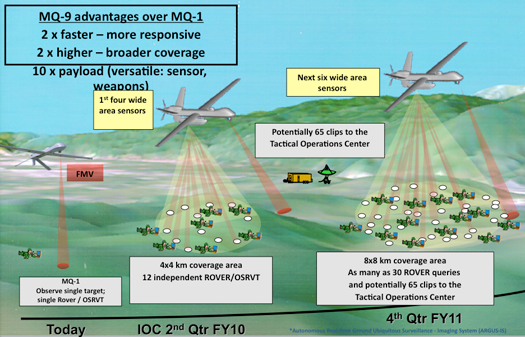 Using multiple infrared and conventional cameras, the Gorgon Stare sensor package will provide a significantly larger area view of the battlefield than the single-camera view on of today’s drones

The system uses an array of five electro-optical and four infrared cameras to capture day and night images from different angles, which are stitched together in a single mosaic scene much broader than what any single lens could deliver. At command central, tiled screens will display the composite picture, so that if an insurgent runs out of view on one, he’ll simply pop up on the next. Field commanders can pull a piece of the picture encompassing their surroundings, and pan, tilt or zoom if they see something suspicious.

The cameras are fitted into a pod under one wing, with the communications gear on the other. The entire package weighs 1,100 pounds, which will still allow the Reaper to carry weapons. (It will work in addition to the Multispectral Targeting System, or MTS ball, which is mounted on the chin of the plane and provides more traditional real-time tracking. See the current sensor package in action in our annotated gun-camera attack video from a Predator strike in Afghanistan.)

“This would have been relatively easy on a manned platform,” said Mike Meermans, Sierra’s vice president of strategic planning. “But with the size and weight limitations, I would almost say we were trying to beat up on the laws of physics with this one.” Still, the package came together in less than 18 months.

To deliver the high data rates the Air Force wanted, the Gorgon’s cameras transmit images at just two frames per second, rather than the 30 fps of full motion video delivered by the MTS. According to Mathewson, that utility is enough to notice if anything changes in a given environment. He says the strategy is to park a Reaper over an area and monitor anything that moves within a four-kilometer square zone, versus the less-than-one-square-kilometer covered by the MTS ball.

The existing cameras obviously work, judging by stories such as the unsuspecting fate of Taliban leader Baitullah Mehsud, who was killed by a UAV-launched Hellfire in Pakistan as his wife administered his final rubdown. Yet the MTS alone is taxing to use. Zooming in for positive identification creates a “soda straw” view, forcing sensor operators to visually sweep a town along the street grid. But that same operator can use the Gorgon Stare’s image to direct the MTS’ full motion video cameras to a particular spot. “I put a WAAS on, and I can see it all now” said Mathewson.”All of it.”

And because all the digital imagery is stored, the Gorgon Stare allows for what you might call forensic surveillance—looking back to reconstruct an event after the fact, à la the time-folding surveillance system seen in the film Déjà Vu. If an IED goes off in a certain quadrant within the Gorgon’s gaze, analysts could re-examine the rest of the footage to see if anyone had visited that site, and where he had gone. Perhaps for a backrub on the roof of his apartment? If a Gorgon-Stare-equipped drone is on the scene, there’s no happy ending in sight.