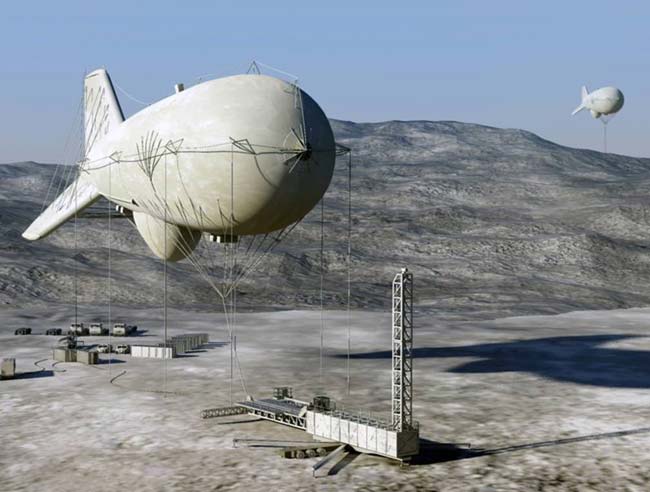 Blimps first soared above battlefields in 1794 to spy on Austrian and Dutch troops. Now the U.S. Army wants them as radar platforms for defense against cruise missiles. A Raytheon-designed blimp made its first flight yesterday at Elizabeth City, North Carolina.

The $1.4-billion blimp carries radar that can see 360 degrees and track down terrain-hugging cruise missiles up to 300 miles away. Another planned blimp would carry fire-control radar to provide targeting info, helping surface-to-air missile systems intercept and shoot down incoming threats, which may also include large rockets and ballistic missiles in the early ascent phase.

Space News reported earlier that the blimps can go for 30 days without a break, before coming down for eight hours of maintenance and flying another 30 days. They can operate at 2 miles above the ground with a tether connected to a mobile mooring station.

Previous demonstrations showed that the blimps also have fairly good survivability under fire. Wilhelm noted in his Space News interview that aerostats have stayed aloft for hours after being riddled with bullets, and would not be easy to target by radar because of their relative lack of motion.

The military has also examined other airship designs as possible surveillance platforms that could hover above areas for weeks at a time, and stay in the air for longer than the growing swarm of drones currently operating above battlefields.