Are You There Aliens? It’s Me, Earth 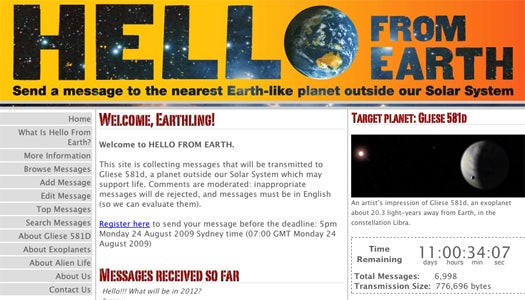 After almost 50 years of waiting for aliens to contact us, Australia’s Cosmos Magazine has decided to be a bit more proactive. In honor of Australia’s national science week, the magazine is giving you a chance to have a message of your choice beamed to the nearest Earth-like planet.

In 11 days, NASA’s Tidbinbilla radio telescope, located in Australia, will send the extensive text message to Gliese 581b, a planet 20.3 light years away. Gliese 581b has been identified as a rocky planet roughly as far away from its star as Earth. That means of all the exoplanets discovered to date, it has the best chance of harboring liquid water, and thus intelligent life.

The catch is that Gliese 581b orbits a very dim red dwarf star. That means that the distance where liquid water would be present is far closer to the star than Earth is to the sun. At that distance, there’s a chance the Gliese 581b is subject to an intense gravitational forces that has stopped the rotation of the planet, leaving one side stuck forever in a frozen night while the other side bakes in an endless day.

But let’s assume that Gliease 581b is rotating, and harboring intelligent life waiting to receive your text message. Head on over to Hello From Earth and tell the people at Cosmos what you want sent to the aliens.

So far, 7,142 people have volunteered a text, and most of them are pretty sappy. I know Popsci.com readers can do better. So, before you go the site and phone E.T., tell us in the comments section what message you want texted into space. Will it be more of the “hello from the peace loving people of Earth” type of message? Or will you go with the more classic “omg, did you see what Ashton just tweeted?!” kind of text? Looking forward to hearing what you’re thinking. Just remember to keep it clean, there might be alien children reading this.