Have you ever been taking pictures of an entire country from space and thought, “you know what, this is ok,... 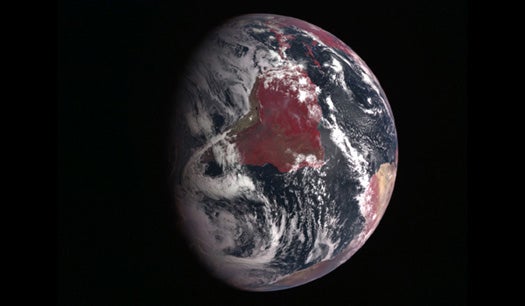 Have you ever been taking pictures of an entire country from space and thought, “you know what, this is ok, but I want to photograph the entire hemisphere at once,”? Well, with Raytheon’s new 16-megapixel infrared sensor, you can.

Or, more precisely, the government can. Designed to work as part of a satellite, the sensor uses 4,096 pixel rows and columns to produce what the company calls, “an ‘unblinking eye’ over an entire hemisphere.”

Now, while that may sound very 1984 to the tin-foil hat crowd, the sensor is primarily designed for missile detection and guidance. So unless you’ve got some SCUDs in your backyard you’re looking to pop off, there aren’t many Big Brother applications for this one.

Beyond the defense application, Raytheon also speculates that the sensor could be used for meteorological surveillance, or turned around and pointed at space to serve as an infrared space telescope. That last application is particularly intriguing, as the current Spitzer Space Telescope (the infrared cousin of the Hubble) only has 256 by 256 pixel resolution.