A new unmanned combat aircraft could soon wing its way to the battlefield and land with the precision of a... 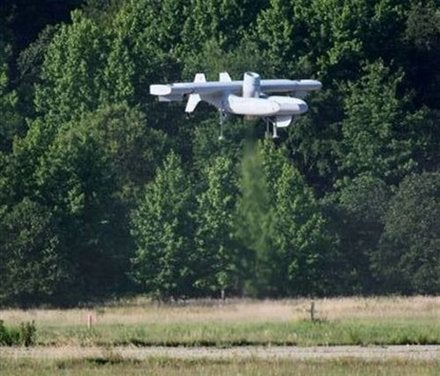 The Excalibur unmanned aircraft can fly at speeds of 460 mph, or hover.
SHARE

A new unmanned combat aircraft could soon wing its way to the battlefield and land with the precision of a helicopter. The Excalibur recently completed its first flight to demonstrate those abilities using a hybrid turbine-electric propulsion system.

The unmanned aerial system (UAS) could pack a 400-pound payload of four Hellfire missiles, and also deliver weapons or other supplies to warfighters deep in rough territory. Its design allows it to have a maximum speed of 460 mph, but also have the ability to loiter overhead at just 115 mph.

“It was a flawless first flight with a crisp takeoff and perfect landing,” reported John Langford, president of Aurora Flight Sciences Corporation. “In flight, the hover stability and heading control performance were excellent.”

The company has been developing Excalibur for the U.S. Army Aviation Applied Technology Directorate and the Office of Naval Research, and it’s not hard to see why those armed services would be excited for a hover UAS. Excalibur’s vertical takeoff and landing ability comes from a tilting turbojet with a 700-pound thrust, along with three battery-powered lift fans.

As Aurora announced the flight of the half-scale demonstrator this week, Aviation Week covered the sneak-preview test flight that took place on June 24 at the Aberdeen Proving Grounds, Maryland.

Excalibur represents a new type of tactical UAS that could join the growing swarm of unmanned aircraft already on the battlefield. Wired notes that the U.S. Air Force recently released a report that contemplates a future without any human pilots, and the Air Force Academy recently introduced the first basic course on flying unmanned vehicles to cadets.

Such robotic aircraft have also found growing use in civilian life, ranging from city law enforcement to scientists wanting to hunt down Burmese pythons from the air. But for now, check out what the next generation of drone can do.