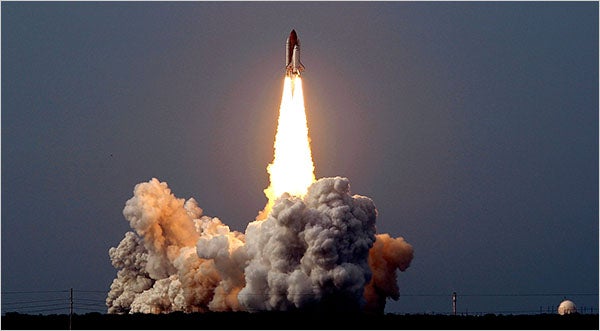 NASA’s Endeavour shuttle launched yesterday evening, after a near-record five delays, on a mission to aid in International Space Station construction for 16 days. However, the craft lost about a dozen pieces of fuel-tank debris during lift off, possibly causing damage to the shuttle.

NASA officials are going to spend the next few days evaluating the damage, the extent of which is currently unknown. They’re main concern revolves around re-entry, where the loss of materials could play a role in a safe landing.

What they do know is that the loose material caused some visible damage to the heat-resistant tiles on the underside of the Endeavour, but they think it’s just surface scuffing.

They also reported that one of the three fuel cells on the Endeavour wasn’t working properly, but believe the loss margin will also be an insignificant factor.

To be safe, they’ll do an inspection of the wings using a laser scanner to make sure they’re structurally sound, and then when they approach the ISS, they’ll flip the craft to get a look at the possibly-damaged underbelly–a maneuver that’s become standard procedure after similar damage caused the breakup of Shuttle Columbia during re-entry.

Other than that, the Endeavour launch was reported as smooth. NY Times