A Reprogrammable Space Probe Design For Mission Multitasking in Orbit 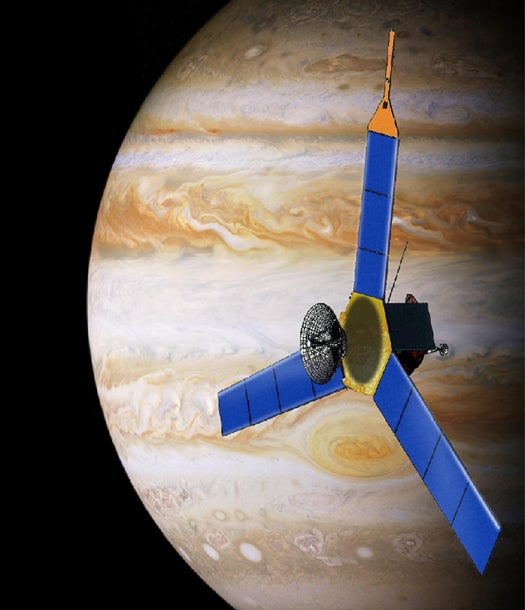 Right now, thousands of satellites are circling the Earth. They’re a diverse bunch. Some relay telephone calls, some spy on North Korea, some monitor the weather. But they all have one thing in common: each can only do one thing. A spy satellite can’t suddenly start forecasting storms, and a communications satellite can’t study asteroids.

Well, that’s all about to change.

Researchers at the Institute of Space Systems at the University of Stuttgart, Germany, have designed a variable-function satellite that can alter its mission on the fly.

The satellite would be loaded down with all manner of sensors, receivers and cameras. And unlike the other satellites currently whizzing around the globe, it would have a special type of microchip that could be reconfigured by mission control. That way, the satellite’s owners could switch from studying asteroids to studying weather simply by remotely reconfiguring the hardware for its new task.

The creator, Toshinori Kuwahara, envisions the satellite as a way to circumvent the long waits scientists experience when scheduling time on expensive, single-use platforms like the Hubble Space Telescope. As Kuwahara sees it, his satellite could be configured for one mission, and when that experiment finishes, another group of scientists can utilize one of the other functions to study a completely different phenomena.

dmer Needless to say, if this idea gets off the ground and starts working, the commercial applications are just as broad. The satellite could, say, provide an entertainment network with additional communications bandwidth for a special event like the Super Bowl, and then switch over to taking pictures of the ground for Google Earth.

Regardless of the uses, providing more capacity with fewer launches can only decrease the cost of using a space-based platform for both science and industry, and would allow a lot more people to utilize the advantages of satellite instruments.